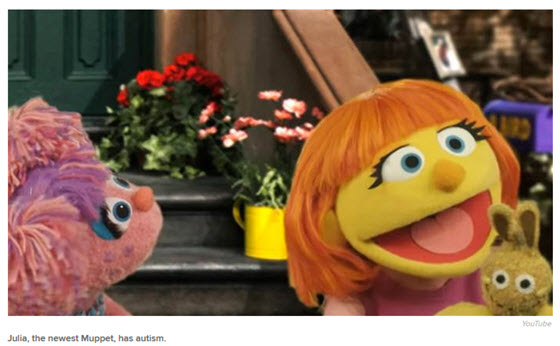 If you live in America, you are now living in a country where we are told autism afflicts an astonishing 1 in 68 children, and specifically for males it’s 1 in 42. By comparison it was 1 in 10,000 back in the 1980s.

What that means is, if you take a walk down your street and knock on every door, you’re probably going to find a kid with autism. Autism is everywhere.

Everywhere including Sesame Street. Call it predictive programming, but the popular puppet-based kids show on PBS now features a new muppet Julia who has autism.

We’re excited to announce a new friend joining us on Sesame Street! She’s Julia, a 4-year-old with autism! #SeeAmazing pic.twitter.com/xDS3x2a5za

Of course, that won’t stop Sesame Street from pushing vaccines on little Julia —