Posted on January 31, 2021 by Cosmic Convergence

BETRAYAL OF THE MILLENNIUM
BY ALL THE USUAL SUSPECTS

SOTN Editor’s Note: There’s no reason to disbelieve even a single word of Patrick Byrne’s insider account (provided below) of what really happened between Election Day and Inauguration Day regarding the highly suspicious actions and inactions of Team Trump.

In light of this extraordinary insider’s account of what actually transpired during the utterly disastrous and obviously futile attempts to expose the greatest election theft in world history, there can be only one conclusion.  Trump’s election defeat, from beginning to end, was all made to happen on purpose!

More specifically, there can be only indisputable conclusion: that the very same treacherous cabal that made sure the election was stolen from Trump by Joe Biden and the Democrat Party is the same tribe of banksters that made sure Trump would not reverse the ballot outcome NO MATTER HOW DAMNING THE VOLUMES OF HARD EVIDENCE.  Irrefutable proof, incidentally, which indicated that President Trump actually received the 80 million votes, not the imposter Biden.

But how did this happen?

Who managed — from the inside — the transparent cover-up of this reckless beyond belief, inconceivably brazen and incomparably desperate election heist by the Democrats?

The very same point man who covered up the U.S. state-sponsored terrorist attacks on New York City on September 11, 2001, that’s who! 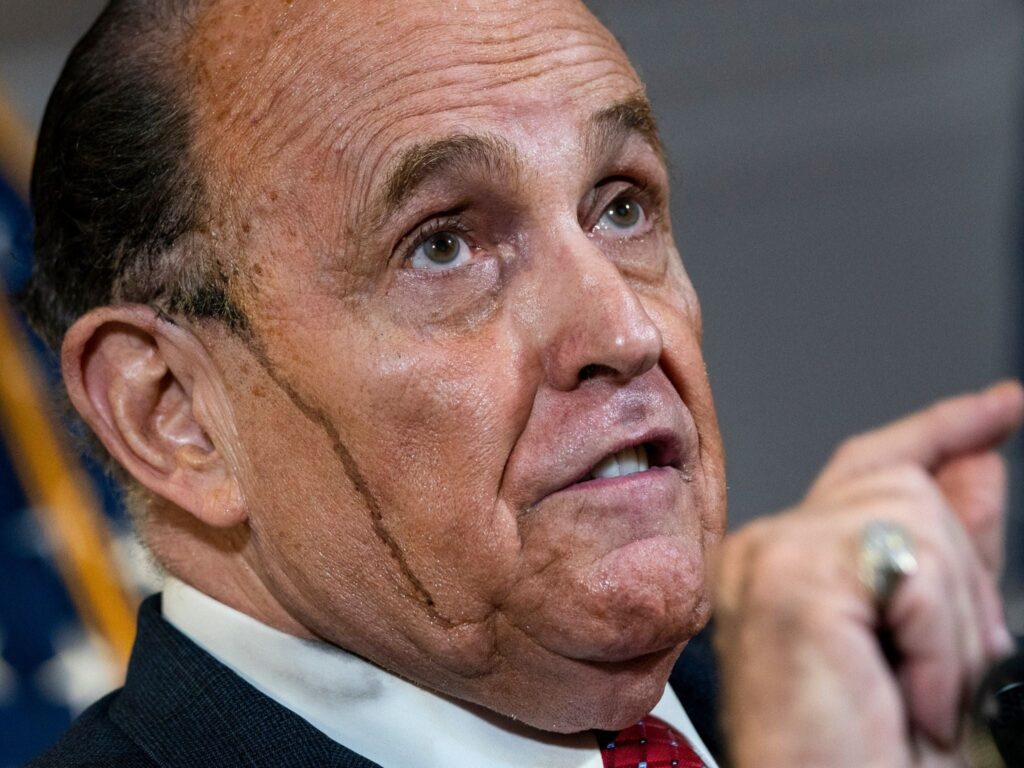 No wonder why Giuliani was sweating so much!

But to be fair, Rudy Giuliani had a close, white collar, Mafioso accomplice in the conduct of this American “Crime of the Century”.

That would be Trump’s closest legal counsel, who clearly misdirected and misled the POTUS at every turn of events—Pasquale Anthony “Pat” Cipollone.

What follows is just the tip of the iceberg of the massive betrayal of Donald Trump by his lifelong friend—Rudy Giuliani.  Just like Giuliani was used by the Khazarian Mafia to get rid of the Sicilian Mafia in the 5 boroughs of New York City when has was both Mayor  and United States Attorney for the Southern District of New York, he was used to cover up the crime wave known as the 9/11 terror attacks.

Is this how the former NYC Mayor was compromised by the
Mossad to sabotage all of Trump’s election legal initiatives?

But perhaps the most catastrophic crime spree overseen by Rudy was this unparalleled cover up of the naked 2020 POTUS election theft.  Because of it, the rule of law has been forever destroyed in these once United States of America.  So have the American election system and electoral process been completely and irreparably demolished … … … just like the same perfidious perps did to the Twin Towers on 9/11/01.  In other words, the American people will never again trust an election outcome—AT ANY LEVEL OF GOVERNMENT!

The Bottom Line here is that Trump knew he was being betrayed all along.  He knew exactly who the betrayers were on his team.  And, he knew precisely who the state actors are who were behind the entire treasonous affair.  Trump’s children also knew about the betrayals, which is why they were virtually silent throughout the post-election war with the Democrats.  Lastly, President Trump knew there was absolutely nothing he could do about it.  When the Khazarian Mafia wants you gone, you’re gone! See: Here’s why TPTB made sure Trump would not win

N.B. The “Patrick Byrne” read below clearly indicates that President Trump knew his team was setting him up for total failure.  Therefore, the only conclusion that can be rationally drawn from this entire saga is presented at the following deep-dive investigative report.

ELECTION PSYOP 2020:
The Well-Hidden Back Story

Now here’s Patrick Byrne’s highly radioactive firsthand testimony from his article “How DJT Lost the White House”.  What follows is a SCREENSHOT of the title page of, as well as a key excerpt from, the above-referenced exposé written by former Overstock CEO and Founder. 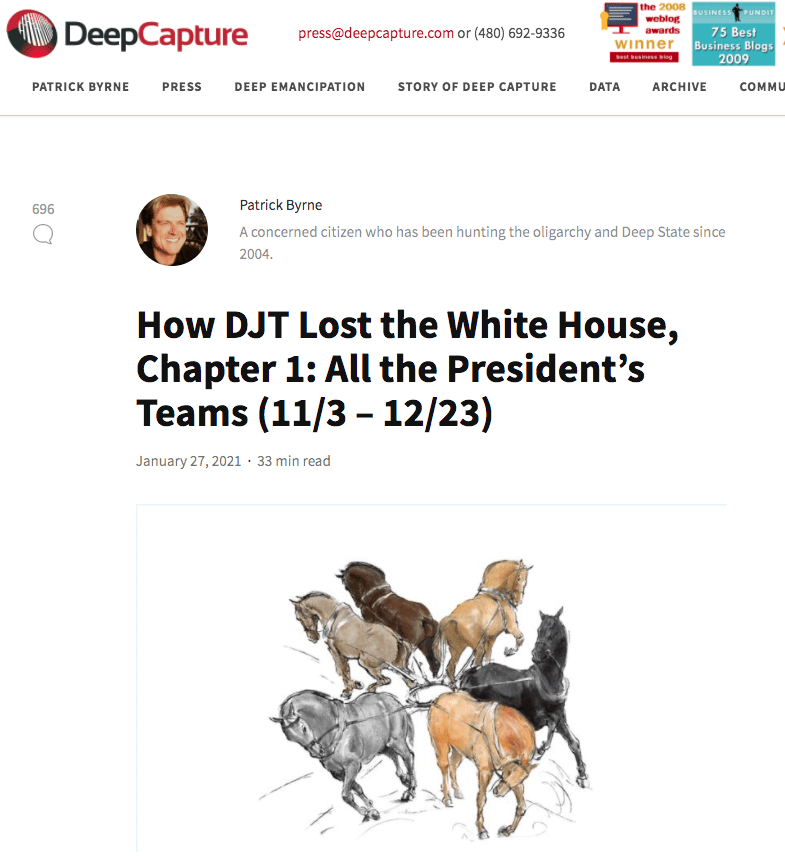 At one point I learned how the President was staying involved. Periodically, the Mediocrity and Rudy Giuliani were going over to the White House to brief him. Really, no kidding: the person who was so bad my colleagues had declared they would quit rather than work another moment with that person, and the 76 year old guy who had trouble sending an email and was spending at least his evenings sloshed, were the ones explaining to the President the cyber-crime of all time and what his options were. At first I thought it was a sick joke, but I confirmed it. The Mayor and the Mediocrity were the ultimate point-people on the mission of addressing this world-historic event.

Flynn and I felt sick. A frequent subject of mutter between us ran along the lines, “Why the fuck are we doing this?” The president’s children were off, uninvolved, pep-rallying, or planning retirements. We could detect no discernible strategy out of the President’s team, no marching orders, just an organization wandering around in circles and melting as it did so. A Mediocrity who was so bad, we had had to make special arrangements such that the Mediocrity did not have contact with our Bad News Bears, or they were going to flee. And the whole mess was led by a 76 year old gentleman, a man beloved by all including myself, but who six weeks into what might be the most sophisticated cyber-theft in all of history, still could not have a coherent conversation beyond, Did you hear that 211 dead people in Philadelphia voted? Dead people?!?!? And they voted! Joe Frazier’s father voted! Have you heard?!?

And then we would remember why were doing it: America’s brand is “elections”. It is what we do. We had a national election that appears to have been compromised in a remarkably precise yet strategic way, it shows the hand of foreign involvement, it may be part of a Chinese psyop to take over our country, and there might never be a free, non-goon election in America again. That’s why we were not supposed to quit, we often reminded each other.

And that is why, a few days before Christmas, General Mike Flynn, Sidney Powell, and I decided it was time to take a chance. By hook or by crook we were going to Jedi-Mind-Trick our way into the White House, maneuver our way to the Oval Office, and grab the President’s attention ourselves. With no invitation.

Continue reading at: How DJT Lost the White House

There can be only one sober conclusion drawn from this highly revealing insider’s account.

As a matter of historical fact the Khazarian Mafia has completely owned and operated the U.S. Corporation (sometimes known as the U.S. Federal Government) since the Federal Reserve Act of 1913.  However, the takeover of the American Republic really began with the signing of the Declaration of Independence and ratification of the U.S. Constitution.

Rome has always waged war against the American people via the Vatican and especially  the ever-seditious Jesuits.  In truth, the Holy Roman Empire, also known as the First Reich, never collapsed; it just morphed into the Fourth Reich—the United States of America.  Which means that the Khazarian Mafia banksters have effectively controlled the Vatican for centuries, just as they have ruled by remote the USA.

In fact, the Black Nobility of Northern Italy during the 12th century quietly ruled the Earth via the Republic of Venice.  Venice, Genoa, Milan, Turin, Florence, Bologna, Rome, etc, all saw the rise of the first modern corporations (which is why the U.S. Corporation is controlled by Rome as the Holy See owns them all), each of which was controlled by the Talmudic moneychangers and Italian merchants through generations of inter-marriage.  This is why the extremely powerful northern Italian banking houses like the House of Medici in Florence became known as God’s banker for the Vatican.

With this critical understanding, it’s easy to understand why so many Italian-Americans, particularly high-profile VIPs, are being used to flagrantly oppress and enslave the U.S. citizenry during THE GREAT SCAMDEMIC. See: Why Italian-Americans VIPs are frequently chosen to do the dirty deeds

KEY POINTS: Some of these bad actors belong to crypto-Jewish families going back to the Black Nobility of the Middle Ages, which means they represent unseen earthly powers who are much more influential in the affairs of men than even the Rothschilds and Rockefellers.  Because the Venetian banksters eventually moved their operations to London, bagmen like Soros are merely front men for the true powers behind the British Crown.  Always remember: Religious/spiritual power (Vatican) trumps financial/economic prowess (London); which in turn trumps political power and military force (New York City and Washington, D.C.).

The upshot of this undeniable analysis is that Trump never even had a chance in 2020.  His election prospects were doomed from the very start.  And, not because of the Democrats or Deep State or New World Order globalist cabal; they’re all quite low on the totem pole.  Rather, it was because the Khazarian Mafia-controlled Black Nobility wanted the Biden-Harris administration to usher in the GREAT RESET across America.  There are several significant reasons for this which are well beyond the scope of this article.

The final point here is that this unbroken chain of worldly power goes back to the Caesars.  And, President Trump was given the same betrayal treatment as inflicted on Julius Caesar in the Roman Senate on the Ides of March.  However, in the present case, the thoroughly machiavellian Black Nobility knows that character assassination can be much more useful than physical assassination especially when carried out by the Khazarian Mafia-controlled Mockingbird Media. 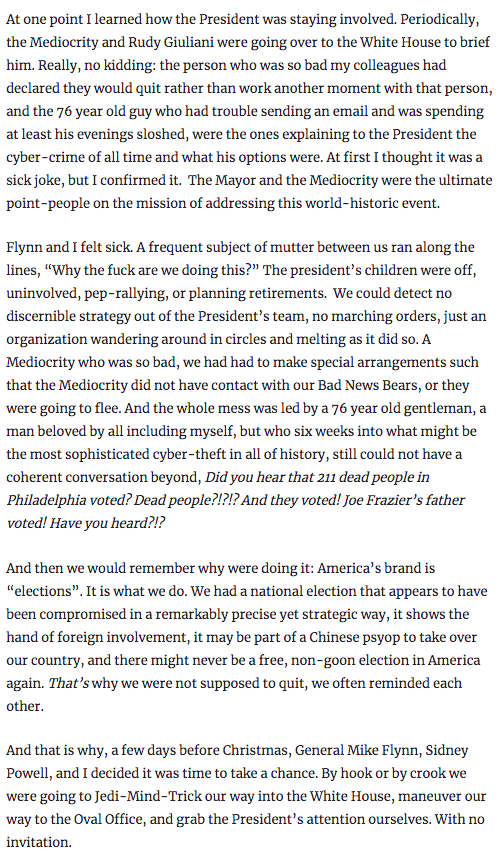