CHRISTMAS STAR! Every Patriot needs to pay close attention to the heavens today, the Winter Solstice.

Posted on December 21, 2020 by Cosmic Convergence 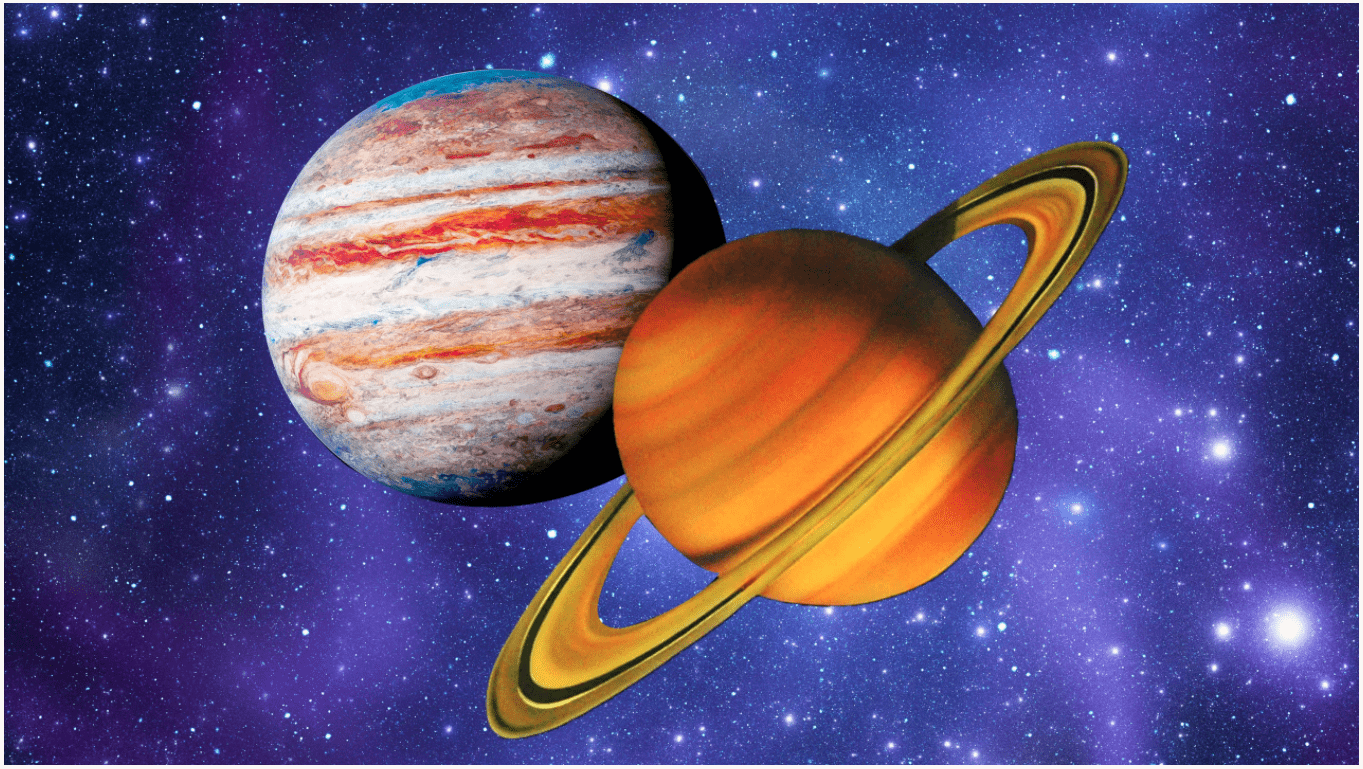 LIVESTREAM of the Event from the Vanderbilt Dyer Observatory can be seen here:

If there is a celestial line of demarcation that signifies the dawning of the Age of Aquarius, it is today, Monday, December 21, 2020, the Winter Solstice.

What distinguishes today as the “Day of Light” is that it is happening on the shortest day of the year and, therefore, when darkness lingers the longest on Earth.

But, alas, on this particular Winter Solstice something quite awesome is about to occur in the heavens. For the firmament is about to be lit up like never before.  The long-awaited “Christmas Star” will appear in the night sky when the two planets — Jupiter and Saturn — come closer together than they have since 1623.

As they appear to almost merge into a single luminary on December 21st, the two largest planets in our Solar System have both, this week, completed their joint journey into the constellation of Aquarius, the Water Bearer.

Let’s be very clear about this uniquely powerful and prophetic astrological event.  Because of the obvious clash of energies as well as the generation of synergies, this Saturn-Jupiter conjunction will affect planet Earth and all of her inhabitants in ways both stunning and astonishing.

Everything that the long anticipated Age of Aquarius conjures up in the minds and hearts of people around the globe can manifest going forward.  As the old structures and systems are collapsing all around us, new ones will replace them.  In point of fact, the entire planetary civilization will undergo a major overhaul, the likes of which has never occurred on this blue orb.

But what are some of the things that make this particular day — December 21, 2020 — such a defining moment for this race of humanity, and so incredibly special for the world community of nations?

What humanity will either witness in the heavens or experience in their very own home is what may be the greatest cosmic event of our lifetime.  That’s because this specific Jupiter-Saturn conjunction augurs the birthing of a new era—the Age of Aquarius.

But why is it so special?

What follows are 7 major factors that, in the aggregate, set apart this very special event, each of which is meaningful in different ways.

What is about to take place here, there and everywhere across the planet is that people will individually and collectively begin to rebel in earnest.  Brave acts will soon become the norm instead of the exception.

We are about to pass through a cosmic window of great promise and opportunity.  As we enter this part of the galaxy on December 21st, Earth will receive the combined light and grace from the most influential planets in our Solar System.  This will in turn trigger powerful planetary processes and profound personal transformations.

This cathartic process will be defined by three primary human endeavors.

First, folks everywhere will start to take back their power as never before.

Secondly, people will begin to stand in their own truth regardless of the pushback.

And, thirdly, masses of brave Patriots will speak that truth to power like never before.

As a matter of correct astrological understanding, the following excerpt well describes where all of humankind is heading.

“Aquarius is the sign that represents the collective. The people will rebel against old outdated Saturnian forces. This is the time for the people to rise up!”[1]

On both the national and regional levels of the Earth plane of existence, there is no question that unparalleled flux and reformation — throughout every sphere of life — is in the offing.

If people thought 2020 was an eventful year with so much change and turmoil, chaos and conflict, wait until you see what happens in 2021.  Basically we are all entering completely uncharted territory, except that, because Saturn and Jupiter are now in the sign of the Water Bearer Aquarius, it’s more like uncharted waters.  And, we will all be taking the same rough, but exhilarating, ride for the next 2 or 3 years.

“The great awakening will bring much revolution and
shift in the collective consciousness over the next year
most prominently. Aquarian themes will be highlighted
in a profound way until 2023.”[1]

With this enlightened awareness about what will soon occur around the world, it’s crucial to have the correct understanding about the coronavirus pandemic.

COVID-19 is, in reality, the gift that never stops giving.  How so?  It has proven to be the truly “Great Awakener”.  In fact, it is no coincidence that this manmade pandemic jumped off in 2020, the very same year as the 2020 “Christmas Star”.

Much of humanity was in great need of a HUGE wake-up call.  The raw truth be told in rather graphic terms is this: humanity as a whole needed to get busted upside the head with a four by four.  And so they have been.  For only in this shocking way will folks get with the new program— a program that departs radically from the present worldwide “Saturnine Control Patrix” (SCP).

What humankind is now experiencing are the death throes of that fatally flawed planetary paradigm.  And, the free-fall collapse of the SCP is being accelerated by the controlled demolition (thanks to Covid) of so many sub-paradigms that define much of Western and Eastern civilization.

The manufactured Covid pandemic has served to markedly intensify the whole process of breakdown which must occur to make way for the new.  Of course, the perpetrators of the coronavirus hoax will eventually be brought to light AFTER IT HAS SERVED IT MANY DIVINE PURPOSES.

Likewise, the GREAT RESET will serve to ensure the controlled demolition of the Global Economic & Financial System, which also needs to crash and burn.  For the damage it has inflicted on the planet and destruction to humankind is too extensive to comprehend.  While many are quite fearful of such an eventuality, it is a necessary stage of the dawning of the Age of Aquarius.

The whole world has been firmly controlled by money over the past 5000 plus years and the various monetary systems are barely on their last legs.  Furthermore, the moneychangers and merchants who have tightly controlled human affairs for centuries desperately need a break as their handiwork is [MAJORLY] contributing to multiple Extinction Level Events.

As a matter of scientific fact, left to their own devices, the banksters and their countless agents are steadily pushing the human race to self-annihilation as they irreparably destroy the biosphere and set nation against nation to trigger their planned World War 3.  However, that won’t happen since too many leaders are on to their long-predicted New World Order scheme.

In any event, everything really does happen for the best, so that’s the best attitude to have moving through 2021 and beyond.  A “birthing process” is never easy, or all that pleasant, yes?! 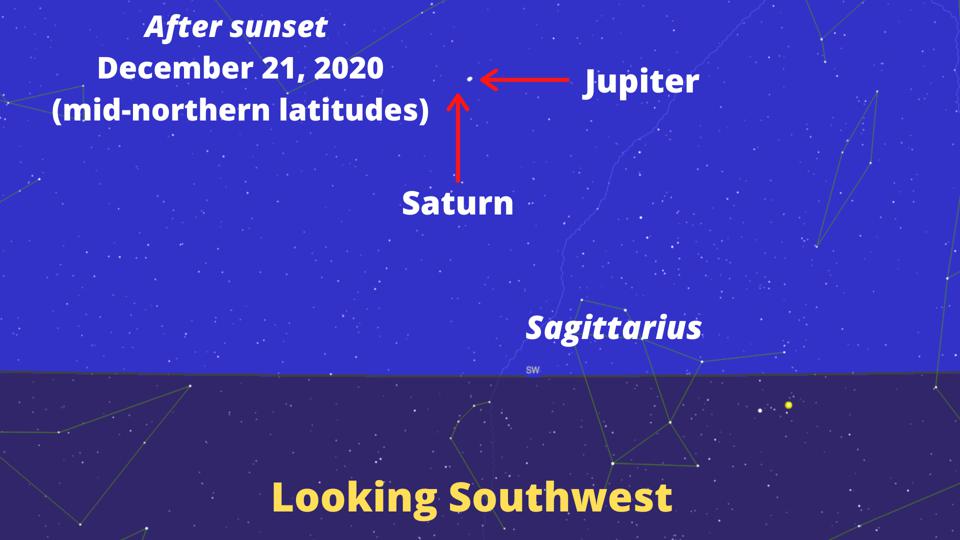 How to see Jupiter and Saturn in a “great conjunction.” JAMIE CARTER

The preceding graphic explains where to look tonight, Monday night, if you have clear skies.  It will be easily seen with the naked eye, but much better with binoculars or a telescope.

Whether you see this cosmic event with your own eyes or don’t, by living on Earth at this awe-inspiring moment every human being will be suffused with the same cosmic rays that pass through our neck of the woods during this highly propitious happening.  And, the conjoining of Jupiter and Saturn as they settle into Aquarius will initiate a period a unparalleled change and necessary realignment.

Botton Line: When we all come out the other side of this extraordinary period of global transformation, we will surely be glad that we courageously stepped up to the plate and hit whatever ball was thrown at US out of the park.

PATRIOTS, take heart! For what is about to transpire will be glorious indeed! But first we all need to show up and play our respective roles in this rapidly unfolding “Greatest Show on Earth”.  For the spotlights of Saturn and Jupiter are shining on each of us.

Special Note: The “Christmas Star” meme is much less about the biblical “Star of Bethlehem” and much more about the current infusion of Christ Consciousness within the whole of humanity.  Clearly, the present civilization has hit the proverbial wall in so many ways.  The only way out of so many deeply problematic predicaments is for all concerned to, first, totally embrace a spiritual solution.  For only when a critical mass of the collective consciousness has been sufficiently imbued with Christ Consciousness “shall the lion lie down with the lamb”.   With “The Great Planet Conjunction” of December 21st of 2020, the world is now one HUGE step closer to the needed planetary metamorphosis that will pave the way for a lasting peace on Earth.

[1] CHRISTMAS STAR! Every Patriot needs to pay close attention to the heavens today, the Winter Solstice.

The following screenshot was taken from a livestream of the Saturn-Jupiter conjunction at 6:20 PM on Monday, December 21, 2020.  Notice the brighter Jupiter toward the bottom left and the ringed Saturn hovering above.  This momentous skyward event was quite easily viewed with the naked eye wherever there was no cloud cover in the Northern Hemisphere. 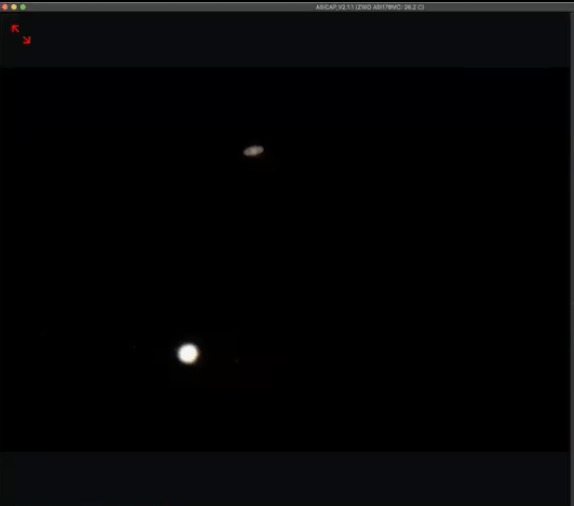