Posted on September 21, 2018 by Cosmic Convergence Two weeks into his job as deputy attorney general, Rod J. Rosenstein was confronted with a crisis: the president’s firing of James B. Comey as F.B.I. director.CreditCreditT.J. Kirkpatrick for The New York Times

WASHINGTON — The deputy attorney general, Rod J. Rosenstein, suggested last year that he secretly record President Trump in the White House to expose the chaos consuming the administration, and he discussed recruiting cabinet members to invoke the 25th Amendment to remove Mr. Trump from office for being unfit.

Mr. Rosenstein made these suggestions in the spring of 2017 when Mr. Trump’s firing of James B. Comey as F.B.I. director plunged the White House into turmoil. Over the ensuing days, the president divulgedclassified intelligence to Russians in the Oval Office, and revelations emerged that Mr. Trump had asked Mr. Comey to pledge loyalty and end an investigation into a senior aide.

Mr. Rosenstein was just two weeks into his job. He had begun overseeing the Russia investigation and played a key role in the president’s dismissal of Mr. Comey by writing a memo critical of his handling of the Hillary Clinton email investigation. But Mr. Rosenstein was caught off guard when Mr. Trump cited the memo in the firing, and he began telling people that hefeared he had been used.

Mr. Rosenstein made the remarks about secretly recording Mr. Trump and about the 25th Amendment in meetings and conversations with other Justice Department and F.B.I. officials. Several people described the episodes, insisting on anonymity to discuss internal deliberations. The people were briefed either on the events themselves or on memos written by F.B.I. officials, including Andrew G. McCabe, then the acting bureau director, that documented Mr. Rosenstein’s actions and comments.

None of Mr. Rosenstein’s proposals apparently came to fruition. It is not clear how determined he was about seeing them through, though he did tell Mr. McCabe that he might be able to persuade Attorney General Jeff Sessions and John F. Kelly, then the secretary of homeland security and now the White House chief of staff, to mount an effort to invoke the 25th Amendment.

The extreme suggestions show Mr. Rosenstein’s state of mind in the disorienting days that followed Mr. Comey’s dismissal. Sitting in on Mr. Trump’s interviews with prospective F.B.I. directors and facing attacks for his own role in Mr. Comey’s firing, Mr. Rosenstein had an up-close view of the tumult. Mr. Rosenstein appeared conflicted, regretful and emotional, according to people who spoke with him at the time.

“The New York Times’s story is inaccurate and factually incorrect,” he said in a statement. “I will not further comment on a story based on anonymous sources who are obviously biased against the department and are advancing their own personal agenda. But let me be clear about this: Based on my personal dealings with the president, there is no basis to invoke the 25th Amendment.”

A Justice Department spokeswoman also provided a statement from a person who was present when Mr. Rosenstein proposed wearing a wire. The person, who would not be named, acknowledged the remark but said Mr. Rosenstein made it sarcastically. 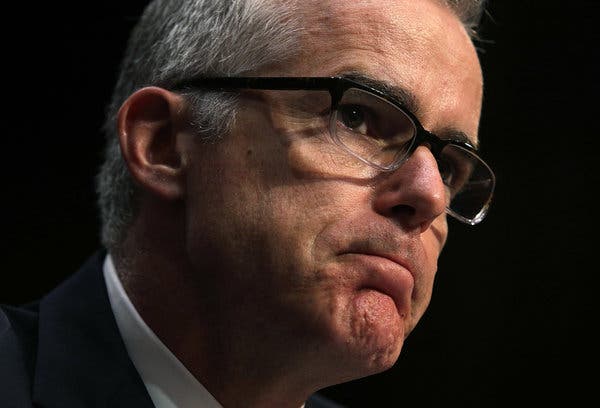 Andrew G. McCabe, who became acting director of the F.B.I. after Mr. Comey was fired, memorialized his interactions with Mr. Rosenstein in memos.    CreditAlex Wong/Getty Images

But according to the others who described his comments, Mr. Rosenstein not only confirmed that he was serious about the idea but also followed up by suggesting that other F.B.I. officials who were interviewing to be the bureau’s director could also secretly record Mr. Trump.

Mr. McCabe, who was later fired from the F.B.I., declined to comment. His memos have been turned over to the special counsel investigating whether Trump associates conspired with Russia’s election interference, Robert S. Mueller III, according to a lawyer for Mr. McCabe. “A set of those memos remained at the F.B.I. at the time of his departure in late January 2018,” the lawyer, Michael R. Bromwich, said of his client. “He has no knowledge of how any member of the media obtained those memos.”

The revelations about Mr. Rosenstein come as Mr. Trump has unleashedanother round of attacks in recent days on federal law enforcement, saying in an interview with the Hill newspaper that he hopes his assaults on the F.B.I. turn out to be “one of my crowning achievements” and that he only wished he had terminated Mr. Comey sooner.

Days after ascending to the role of the nation’s No. 2 law enforcement officer, Mr. Rosenstein was thrust into a crisis.

On a brisk May day, Mr. Rosenstein and his boss, Mr. Sessions, who had recused himself from the Russia investigation because of his role as a prominent Trump campaign supporter, joined Mr. Trump in the Oval Office. The president informed them of his plan to oust Mr. Comey. To the surprise of White House aides who were trying to talk the president out of it, Mr. Rosenstein embraced the idea, even offering to write the memo about the Clinton email inquiry. He turned it in shortly after.

A day later, Mr. Trump announced the firing, and White House aides released Mr. Rosenstein’s memo, labeling it the basis for Mr. Comey’s dismissal. Democrats sharply criticized Mr. Rosenstein, accusing him of helping to create a cover story for the president to rationalize the termination.

“You wrote a memo you knew would be used to perpetuate a lie,” Senator Christopher Murphy, Democrat of Connecticut, wrote on Twitter. “You own this debacle.”

The president’s reliance on his memo caught Mr. Rosenstein by surprise, and he became angry at Mr. Trump, according to people who spoke to Mr. Rosenstein at the time. He grew concerned that his reputation had suffered harm and wondered whether Mr. Trump had motives beyond Mr. Comey’s treatment of Mrs. Clinton for ousting him, the people said. 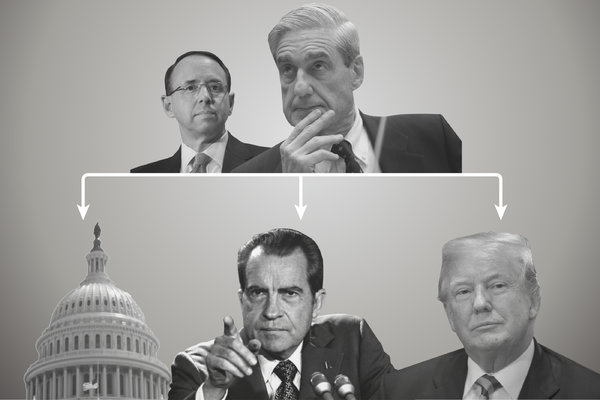 How the Mueller Investigation Could Play Out for Trump

If Robert S. Mueller III, the special counsel, finds evidence that Mr. Trump broke the law, he will have decisions to make about how to proceed. We explain them.

During their discussion, Mr. Rosenstein expressed frustration at how Mr. Trump had conducted the search for a new F.B.I. director, saying the president was failing to take the candidate interviews seriously. A handful of politicians and law enforcement officials, including Mr. McCabe, were under consideration.

To Mr. Rosenstein, the hiring process was emblematic of broader dysfunction stemming from the White House. He said both the process and the administration itself were in disarray, according to two people familiar with the discussion.

Mr. Rosenstein then raised the idea of wearing a recording device or “wire,” as he put it, to secretly tape the president when he visited the White House. One participant asked whether Mr. Rosenstein was serious, and he replied animatedly that he was.

If not him, then Mr. McCabe or other F.B.I. officials interviewing with Mr. Trump for the job could perhaps wear a wire or otherwise record the president, Mr. Rosenstein offered. White House officials never checked his phone when he arrived for meetings there, Mr. Rosenstein added, implying it would be easy to secretly record Mr. Trump.

The suggestion itself was remarkable. While informants or undercover agents regularly use concealed listening devices to surreptitiously gather evidence for federal investigators, they are typically targeting drug kingpins and Mafia bosses in criminal investigations, not a president viewed as ineffectively conducting his duties.

In the end, the idea went nowhere, the officials said. But they called Mr. Rosenstein’s comments an example of how erratically he was behaving while he was taking part in the interviews for a replacement F.B.I. director, considering the appointment of a special counsel and otherwise running the day-to-day operations of the more than 100,000 people at the Justice Department.

Mr. Rosenstein’s suggestion about the 25th Amendment was similarly a sensitive topic. The amendment allows for the vice president and majority of cabinet officials to declare the president is “unable to discharge the powers and duties of his office.”

Merely conducting a straw poll, even if Mr. Kelly and Mr. Sessions were on board, would be risky if another administration official were to tell the president, who could fire everyone involved to end the effort. 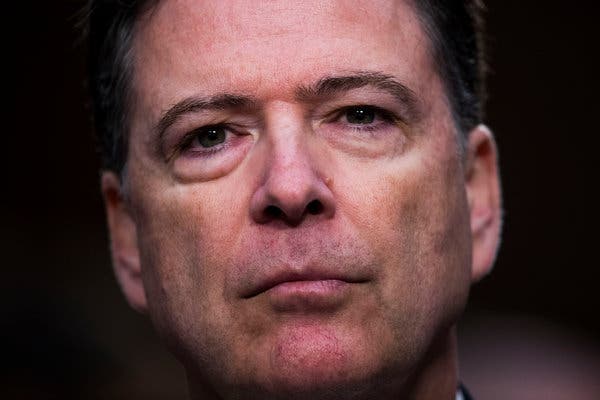 Mr. Rosenstein acknowledged that Mr. Comey was a role model but said he thought it was appropriate to seek a new leader for the F.B.I.    CreditDoug Mills/The New York Times

Mr. McCabe told other F.B.I. officials of his conversation with Mr. Rosenstein. None of the people interviewed said that they knew of him ever consulting Mr. Kelly or Mr. Sessions.

Some of the details in Mr. McCabe’s memos suggested that Mr. Rosenstein had regrets about the firing of Mr. Comey. During a May 12 meeting with Mr. McCabe, Mr. Rosenstein was upset and emotional, Mr. McCabe wrote, and said that he wished Mr. Comey were still at the F.B.I. so he could bounce ideas off him.

Mr. Rosenstein also asked F.B.I. officials on May 14, five days after Mr. Comey’s firing, about calling him for advice about a special counsel. The officials responded that such a call was a bad idea because Mr. Comey was no longer in the government. And they were surprised, believing that the idea contradicted Mr. Rosenstein’s stated reason for backing Mr. Comey’s dismissal — that he had shown bad judgment in the Clinton email inquiry.

Mr. Rosenstein, 53, is a lifelong public servant. After graduating from the University of Pennsylvania and Harvard Law School, he clerked for a federal judge before joining the Justice Department in 1990 and was appointed United States attorney for Maryland.

Mr. Rosenstein also considered appointing as special counsel James M. Cole, himself a former deputy attorney general, three of the people said. Mr. Cole would have made an even richer target for Mr. Trump’s ire than has Mr. Mueller, a lifelong Republican: Mr. Cole served four years as the No. 2 in the Justice Department during the Obama administration and worked as a private lawyer representing one of Mrs. Clinton’s longtime confidants, Sidney Blumenthal.

Mr. Cole and Mr. Rosenstein have known each for years. Mr. Cole, who declined to comment, was Mr. Rosenstein’s supervisor early in his Justice Department career when he was prosecuting public corruption cases.

Mr. Trump and his allies have repeatedly attacked Mr. Rosenstein and have also targeted Mr. McCabe, who was fired in March for failing to be forthcoming when he was interviewed in an inspector general investigation around the time of Mr. Comey’s dismissal. The inspector general later referred the matter to federal prosecutors in Washington.

The president’s allies have seized on Mr. McCabe’s lack of candor to paint a damning picture of the F.B.I. under Mr. Comey and assert the Russia investigation is tainted.

The Justice Department denied a request in late July from Mr. Trump’s congressional allies to release Mr. McCabe’s memos, citing an ongoing investigation that the lawmakers believed to be Mr. Mueller’s. Mr. Rosenstein not only supervises that investigation but is considered by the president’s lawyers as a witness for their defense because he also sought the dismissal of Mr. Comey, which is being investigated as possible obstruction of justice.