AIM CONCLAVER JOHN BARNWELL SUMMARIZES CROWNGATE: THE GREATEST CRIMINAL CONSPIRACY IN U. S. HISTORY IN THIS TWEET THREAD. PLEASE SHARE WITH OTHERS.

Note to AIM Patriots: This twitter thread was compiled by John Barnwell who is an historian in the AIM Conclave. If you wish to pass along the info from Twitter, access the link in the headline above.

For those of you who prefer a WordPress platform, please read below. This is important historicial information needed to understand the breadth and depth of the foreign meddling in our election and the British attempt to overthrow Donald Trump. When you look at the origin of the coup, it takes you right smack into the British Privy Council.

PART I: SPY-GATE IS DIRECTED BY THE CROWN’S COURTIERS IN THE UK, NOT BY RUSSIA Queen’s “Golden Shares” in defense companies give her counselors significant control over war, intelligence, healthcare & propaganda

2) Alison Saunders, Dir. of Public Prosecutions (DPP) at Crown Prosecution Service (CPS). Her American assets, the Ohrs, Strzok, Comey, Mueller, Lynch, Page, McCabe, etc. were committing treason, and the Queen’s Privy Council was anxious to make sure they would execute the plan.
.
3) The plan was to frame the Trump campaign with their phony Steele “dirty dossier.”
Alison Saunders, CB, the Queen’s top prosecutor came to dinner at Bruce and Nellie Ohr’s home four days before the infamous Trump Tower meeting.
.
4) Election interference by a Queen’s agent is espionage and for the Americans who helped is treason.

5) Christopher Steele evidently took orders from the Queen’s Privy Council brainwashing chief Sir Geoffrey E. Pattie—founder and chairman of Cambridge Analytica and parent SCL Group who told The Guardian (2005) their mission was psyop “mindbending for political purposes.”
.
6) The Crown influences the Senior Executive Service (SES), Serco, Crown Agents, Rio Tinto, Urenco, Uranium One, Lockheed Martin, The Aerospace Corporation, BAE, OPIC, USAID, USTDA, MCC, DoD, State Dept, Patent Office, Commerce Dept, HHS, DOE, DoE, NSA, C.I.A., FBI, DOJ…
.
7) …TheCityofLondonUK, Gates Foundation, GSC, Wall Street and Silicon Valley to name a few.
..
8) Too incredible to be true? We thought so to, but the facts say otherwise.
.
9) So tell me, given his relationship to Cambridge Analytica, what’s so great about Steve Bannon?
.
10) Clue: “The Great Game” as the Brits fondly call it, is about a marked propensity to play both ends against the middle (like when Baron Rothschild & Co. funded both Britain and France during the Napoleonic Wars. As they say: “No matter who loses, we win.”
.
11) History Lesson:On Dec. 09, 1916, new British Prime Minister David Lloyd George formed a five-person War Cabinet.
.
12) Since then, The Crown has made Russia the brunt of their machinations going back to the British War Cabinet failing to provide promised military assistance to Russian Czar Nicholas II – King George’s cousin.
.
13) This resulted in the Bolshevik Revolution within three weeks of War Cabinet Lord Alfred Milner’s return to London from Russia; where he failed to provide Russia the needed resources that the British government had already approved.
.
14) Vladimir Lenin had just made his banker-financed and visa-waived train trip by sealed train through war time Germany back to St. Petersberg (Petrograd) from Switzerland during the Russian Revolution of 1917.
.
15) Lenin immediately arranged the execution of the Czar and his family (Jul. 17, 1917) as one of his first acts of treachery.
.

PROOF OF THE 100-YEAR ANGLO-AMERICAN PROPAGANDA WAR – PATRIOTS ARE ENDING IT! Proof the 1917 British War Cabinet (WWI) created modern day weaponize propaganda George Soros and the formation of the C.I.A. are linked

21) Presented by J.B. contributions of far too many people to name; Nonetheless, I wish to credit Douglas and Tyla Gabriel and the Conclave at American Intelligence Media, Michael McKibben and associates at Americans4Innovation and Field McConnell and friends at Abel Danger.

.
23) POTUS doesn’t just casually tweet. Why was it launched a day after accepting the Queen’s invitation for a state visit? Get to know the British actors as the next chapter of the Trump overthrow attempt begins to unfold.
.
. 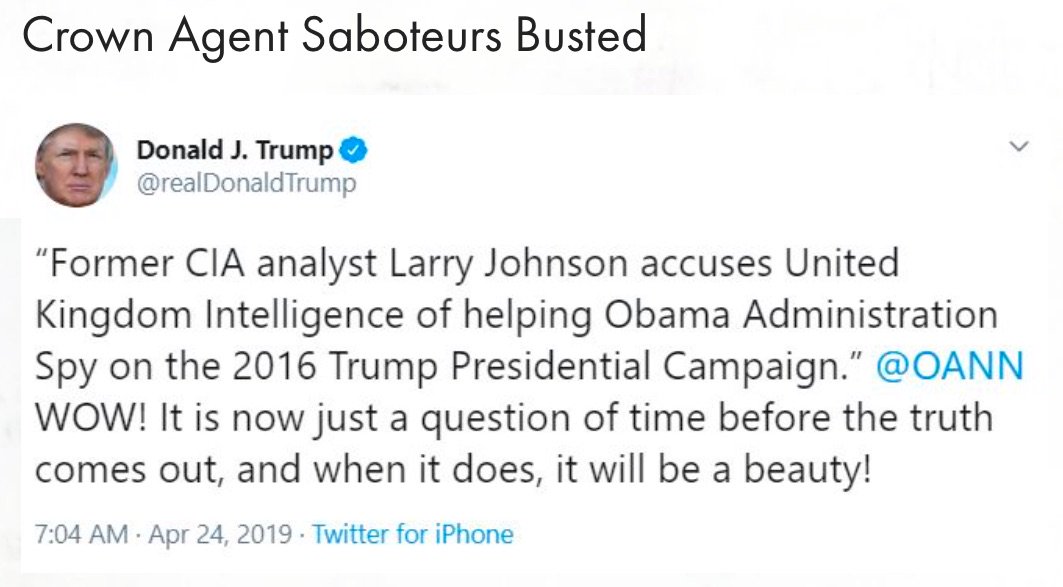 .
24) You will discover many more foreign actors that were involved in the overthrow attempt of Donald Trump. And don’t think for one minute that they aren’t gearing up for a final shot at him when he visits the Queen in June.
.
. 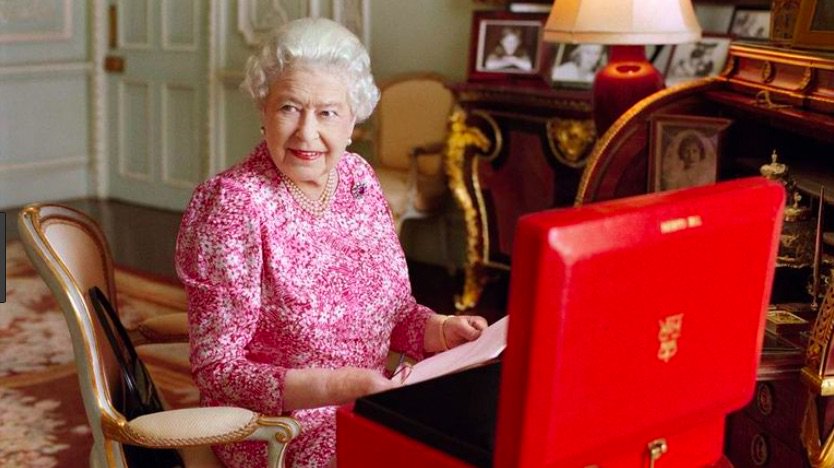 .
25) Nov. 18 2016 — A Steele associate named Andrew Wood [ informed Arizona Sen. John McCain about the allegations made in the dossier. 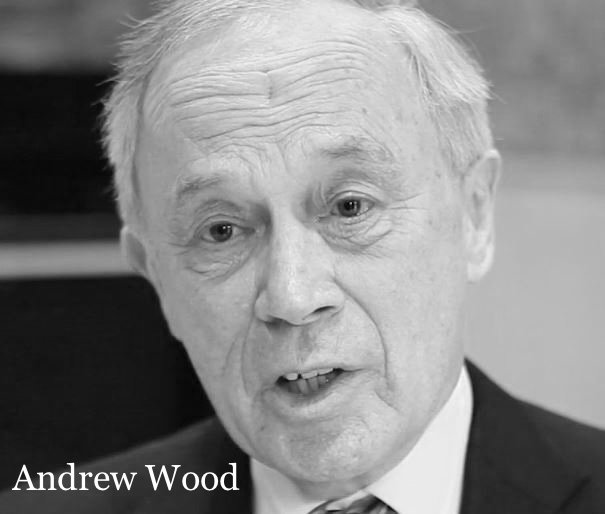 .
.
26) Oct 2017 The Washington Free Beacon informed the House Intelligence Committee of the fact that it is funded largely by anti-Trump Jewish billionaire Paul Singer.
.

27) Paul Singer, the Free Beacon’s largest funder, hired Fusion GPS to investigate US President Donald Trump during his presidential campaign in what is known in politics as “opposition research.”
.
28) After the Free Beacon stopped funding the research, the DNC and the Hillary Clinton campaign’s law firm, Perkins Coie, picked up the deal with Simpson’s company Fusion GPS. In June 2016, Fusion GPS hired Christopher Steele, a former MI6 agent, to obtain information on Trump.
.
29) Dec. 7 2017 — Fox News reports that Bruce Ohr had been stripped of his title as assistant deputy attorney general after the revelation that he met with Steele and Simpson last year. It is later reported that his wife, Nellie Ohr, worked last year for Fusion GPS.
.
30) Arvinder K. Sambei is also a former chief Crown prosecutor, like Alison Saunders. We believe Saunders was sent by Arvinder K. Sambei to have a secret meeting with the Ohrs on behalf of the Privy Council to ensure a successful take down of Donald Trump’s campaign.
.
. 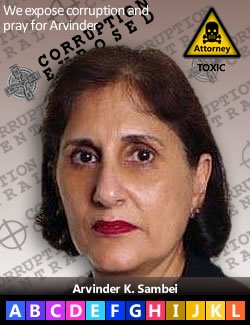 31) We also now know that Arvinder Sambei was working for the FBI and Robert Mueller after 9/11; she was engaged in pressing false narratives in the UK about the alleged 9/11 hijackers within days of the event.
.
32) Did Sally Yates, Ohr’s boss, attend the meeting? How about Peter Strzok? Lisa Page? Bill Priestap? Loretta Lynch? James Comey? Robert Mueller? Andrew McCabe? Andrew Weissmann? The mind wanders…
.
33) Why would the British Crown interfere in the election of @realDonaldTrump? Because Trump was a threat to their 200-year Cecil Rhodes plan for one world government that has even deeper roots in the British Empire and their competition with Germany.
.
.
.
. 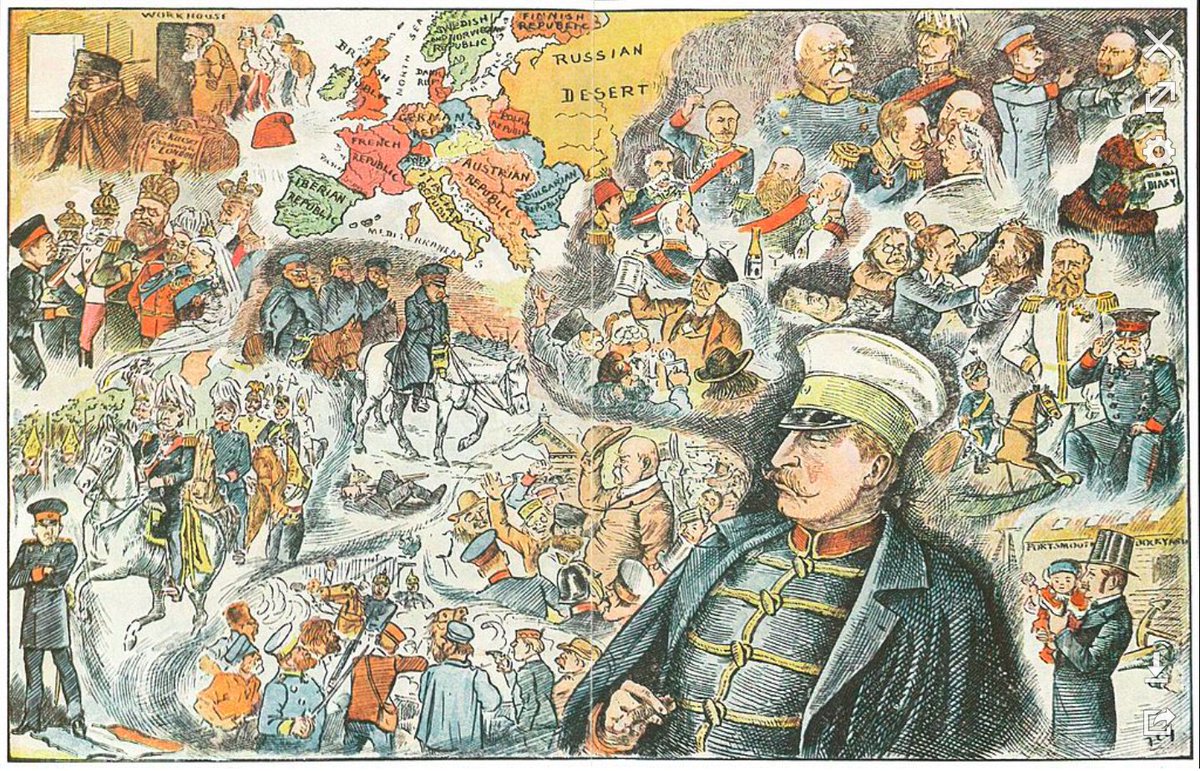 .
34) The Judicial Watch evidence of Alison Saunders’s espionage and the Ohrs’ treason should be sufficient for their just penalties.
.
35) George Papadopoulos disclosed in “Deep State Target” that Arvinder Sambei, director of LCILP (London Center for International Law and Practice) asked him to travel with Joseph Mifsud to LINK Campus in Rome where rogue C.I.A. agents train outside of Congressional oversight.
. 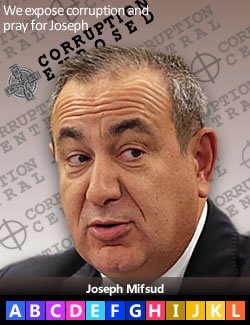 .
36) This rogue LINK activity is an outgrowth of the illegal, totally secret spying agreement between the U.S. & Britain on Mar. 05, 1946 that empowered global mischief among the SOE (Special Operations Executive) stay-behind units, commandeered by the newly forming rogue C.I.A.
.
37) MAR 07, 2019 Judicial Watch Uncovers DOJ Records Showing Numerous Bruce Ohr Communications with Fusion GPS and Christopher SteeleOhr repeatedly thanked Steele for ‘Updates’ and Assures Steele he will ‘Pass this [Information] along to my Colleagues’

.
40) April 4, 2018 All Russiagate Roads Lead To London As Evidence
Emerges Of Joseph Mifsud’s Links To UK Intelligence
Contributors: Elizabeth Vos, Kenneth Whittlefbcoverup.com/docs/library/2…
41) May 20, 2018, Sir Richard Dearlove & UK Intelligence Ties, by Jeff Carlson, CFAfbcoverup.com/docs/library/2…
.
42) Apparently, those wiretaps were setup for the FBI by British GCHQ spy Robert Hannigan,
.
43) Robert Hannigan, former head of British intelligence agency GCHQ, is another personality of note in the formation of the RussiaGate narrative and its surprisingly deep links to the UK.
.
44) “The Guardian noted that Hannigan announced he would step down from his leadership position with the agency just three days after the inauguration of President Trump, on 23 January 2017.” E. Vos & K. Whittle, Disobedient Media, ibid
.
45) “Jane Mayer in her profile of Christopher Steele published in the New Yorker also noted that Hannigan had flown to Washington D.C. to personally brief the then-CIA Director John Brennan on alleged communications between the Trump campaign and Moscow.” Vos & Whittle, ibid
.
46) “What is so curious about this briefing “deemed so sensitive it was handled at director-level” is why Hannigan was talking director-to-director to the CIA and not Mike Rogers at the NSA, GCHQ’s Five Eyes intelligence-sharing partner.” Vos & Whittle, ibid
.
47) It will be remembered, both CIA Dir John Brennan and Dir of National Intelligence James Clapper were calling for Admiral Rogers to be removed from his post as NSA Director after he dared to meet privately with the President-Elect in Trump Towers.
. 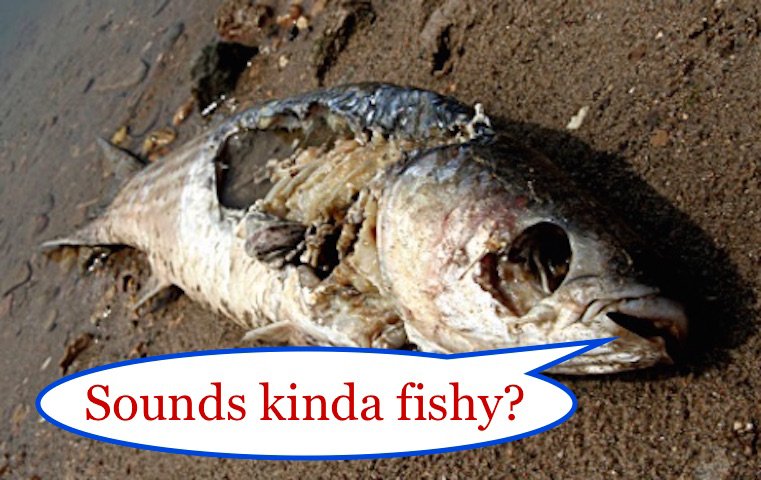 THE WEB OF CORPORATE OLIGARCHY ENSNARES THEM

49) So, what is the historical-political basis of the American Idea as represented in our founding documents? Keep in mind, we are meant to be Free Citizens of a Constitutional Republic not Subjects of the Crown…

LIBERTY AND CONSCIENCE VS INSTITUTIONAL LEFT

50) Meanwhile, back to our story of perdition, lest we forget the Weiner Laptop…

51) In the Weiner Laptop is a folder named “Insurance Policy”; it has tons of data that can serve as protection for A. Weiner & Clintonista Huma Abedin. While this is intriguing, we know this is unnecessary due to the elaborate surveillance systems in place (Like Stellar Wind).
. 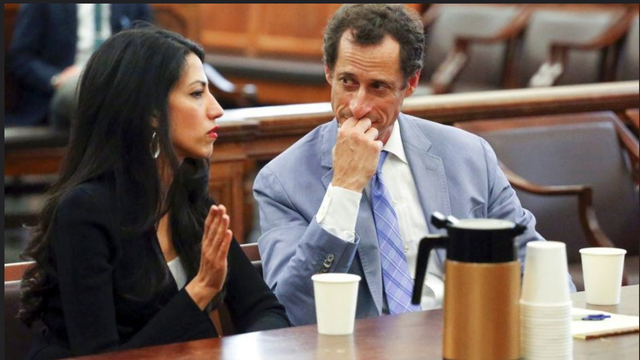 .
52) Project “Stellar Wind” was first authorized on Oct. 4, 2001, immediately after 9/11, by Pres George Bush and was revealed by Thomas Tamm to The New York Times in 2004 that NSA conducts mass surveillance on every American without a warrant. More details emerged over time…
. 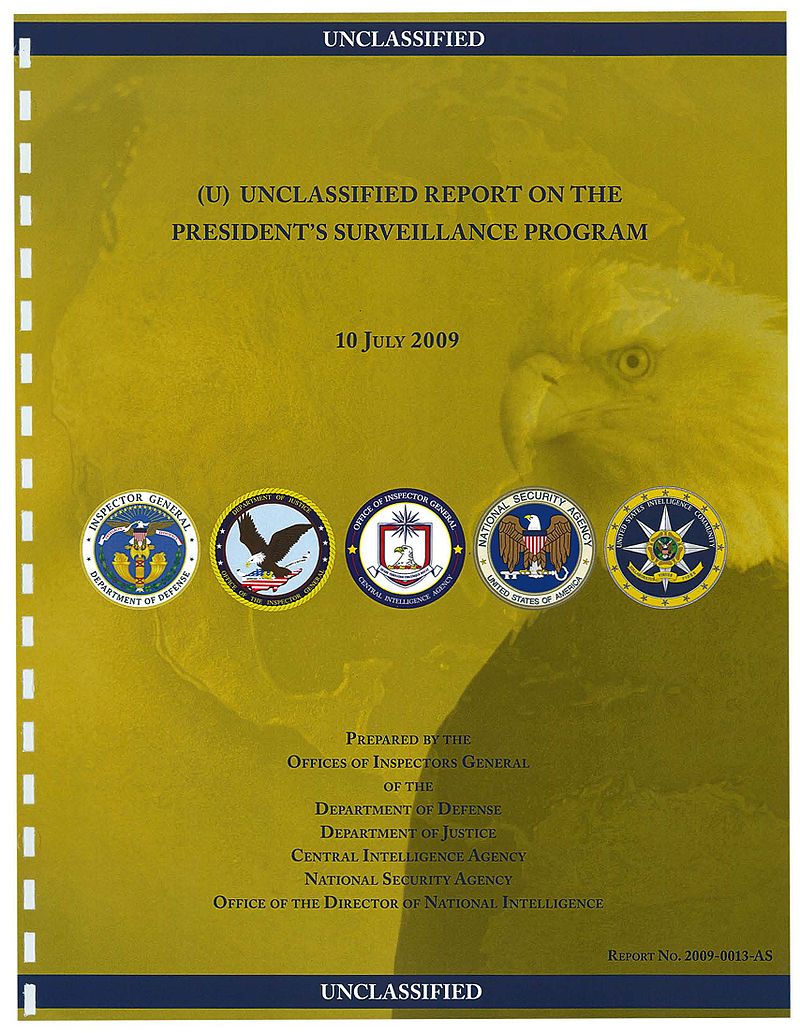 .
53) The single attorney who gave the authorization was John C. Yoo, a Harvard classmate of Barack Obama. Both George Bush and Barack Obama have reauthorized the program many times.
. 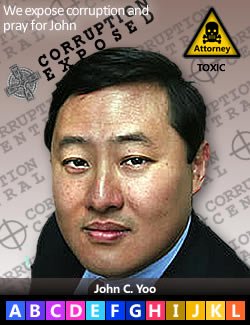 54) As recently as Jan. 12, 2017, with just days left in his presidency, Obama signed Amendments to Executive Order 12333 to make it even easier for the intelligence agencies to share unfiltered, raw streams of information about innocent people.
.
55) John C. Yoo, Bush Deputy Assistant AG, the ONLY legal official in the Justice Dept who knew about the illegal mass surveillance of Americans for the first 1.5 years of the Stellar Wind program (not even his boss Jay S. Bybee knew)… that he had unilaterally approved. 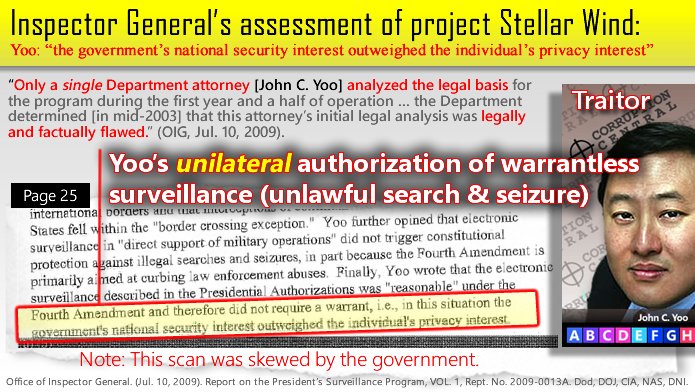 .
56) Read the Office of Inspector General’s (OIG) Jul. 10, 2009 assessment of the “Stellar Wind” illegal surveillance program here:
americans4innovation.blogspot.com/search?q=stell…
.
57) Five Eyes: So, Is there a “Special Relationship” between the U.S. and the U.K.? Yes, Spy-Gate originated from the Queen’s Privy Council in the U.K., not from Russia. Sir Geoffrey Pattie is the ringleader of #Crowngate.
. 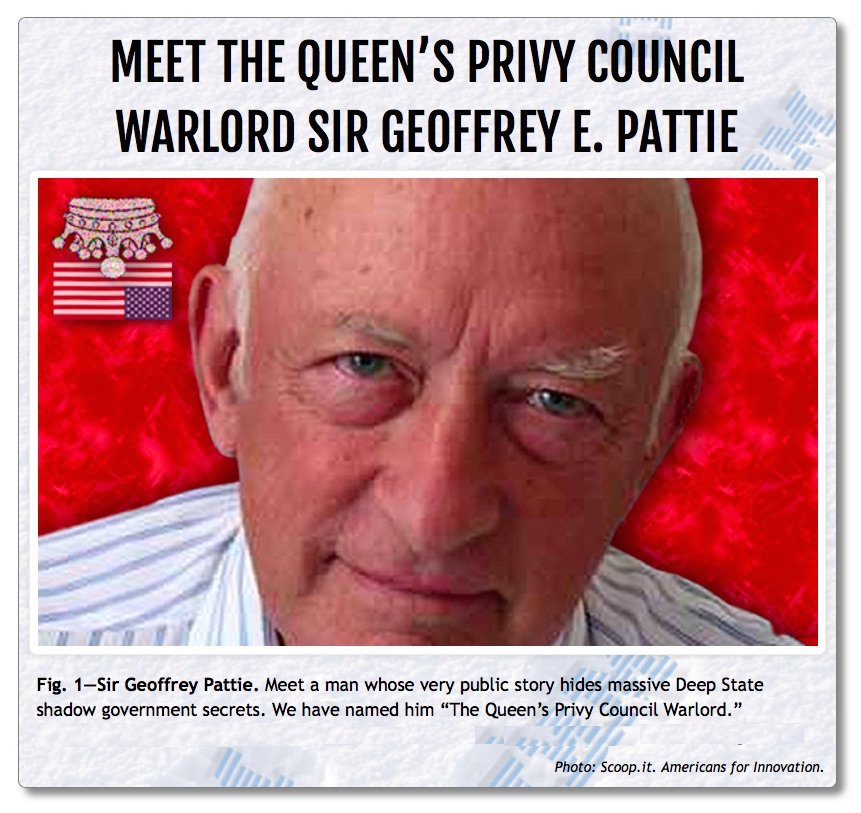 .
58) This UK Globalist strategy is presented in “Tragedy and Hope: A History of the World in Our Time,” by Prof Carroll Quigley, Georgetown Univ., the mentor of former president Bill Clinton, who wrote the introduction to the current edition.
Free pdf:
carrollquigley.net/pdf/Tragedy_an…
.
59) #Crowngate
. 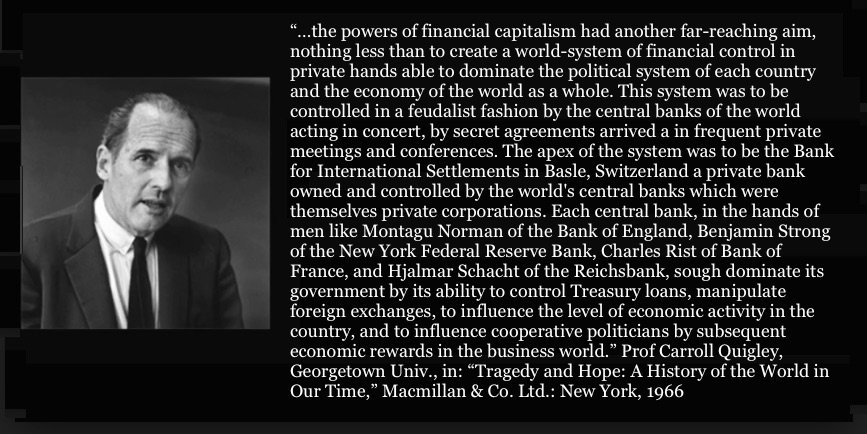 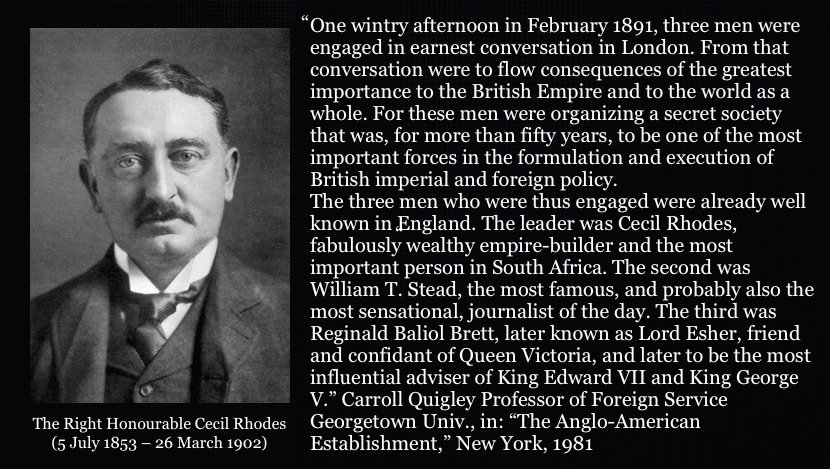 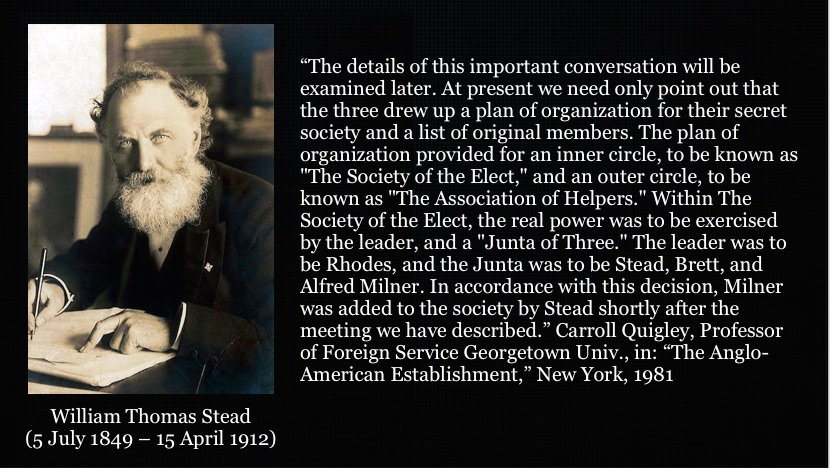 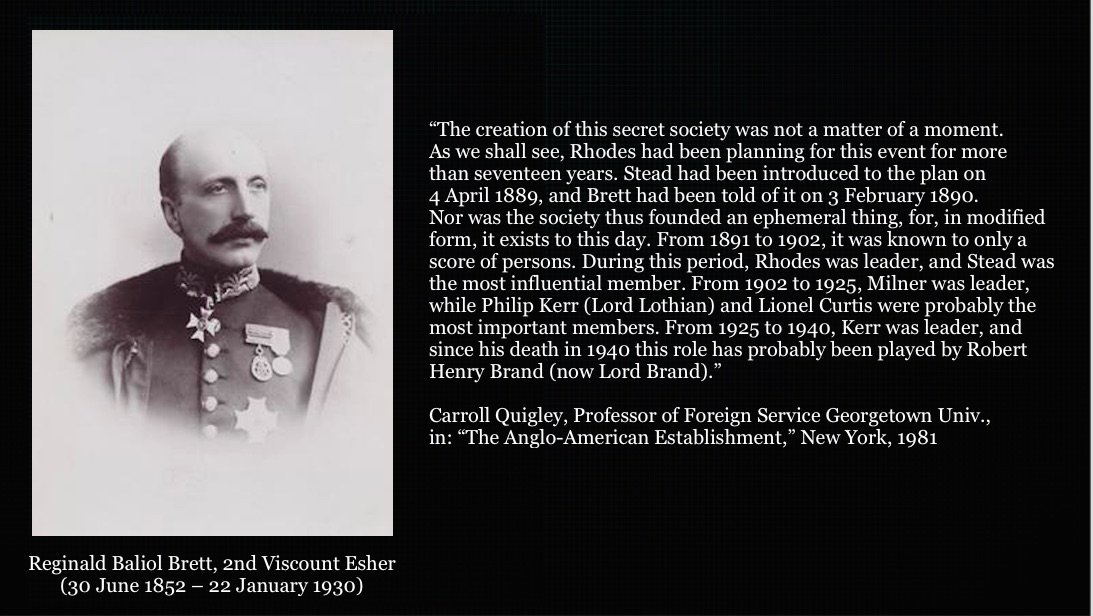 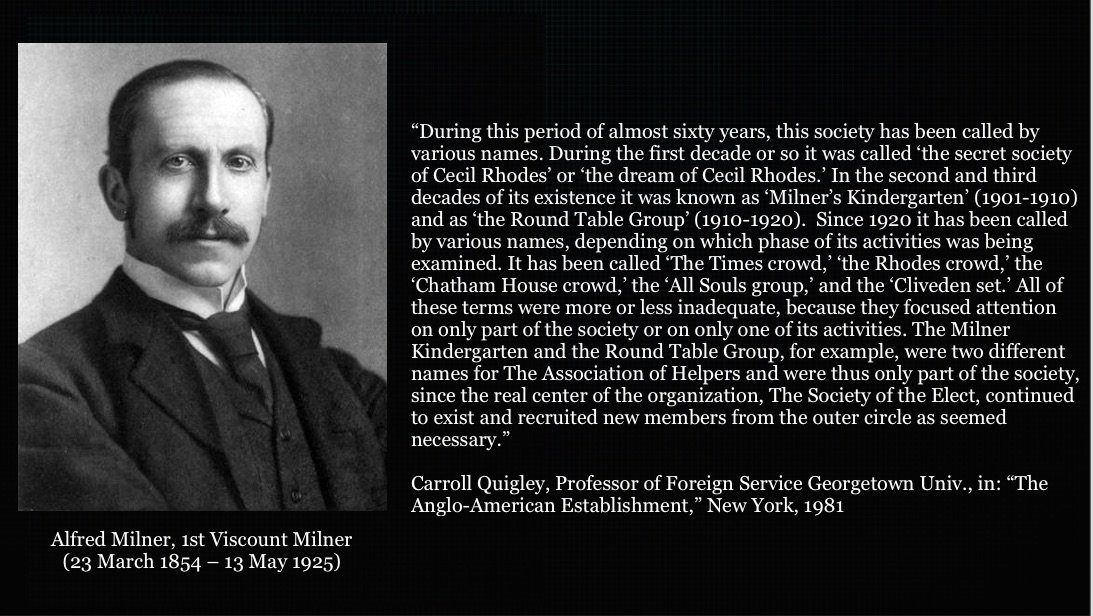 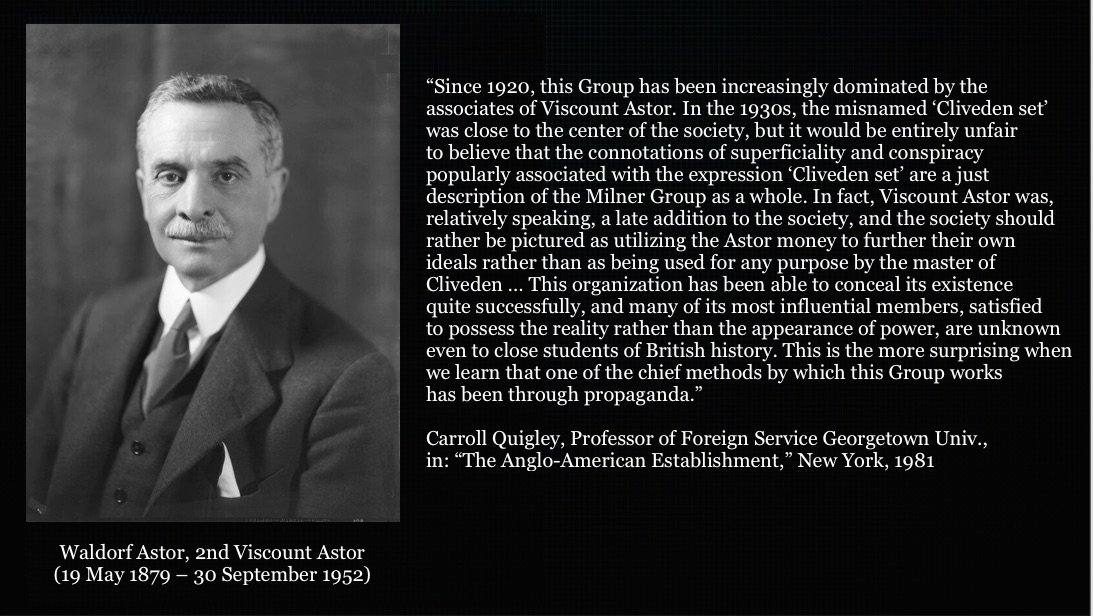 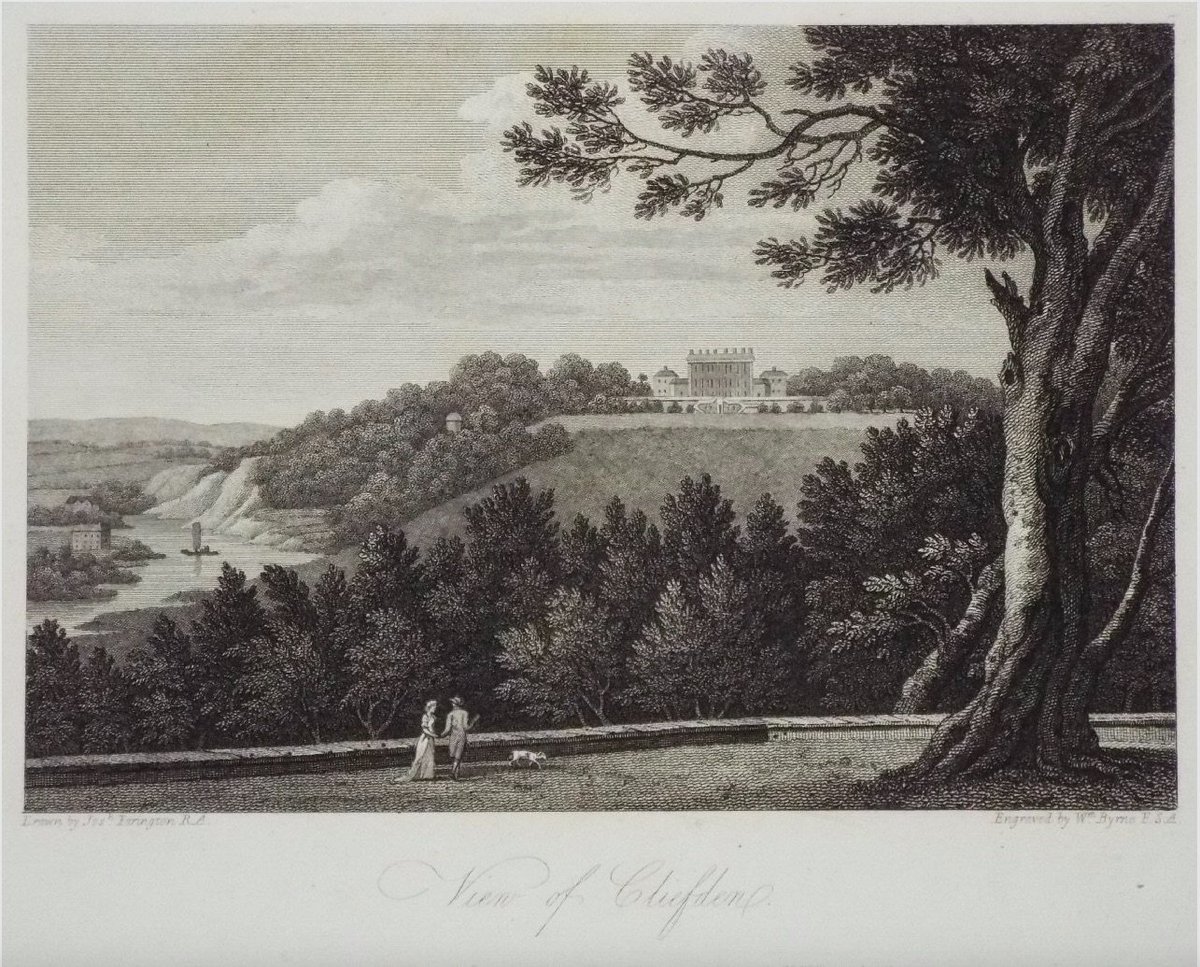 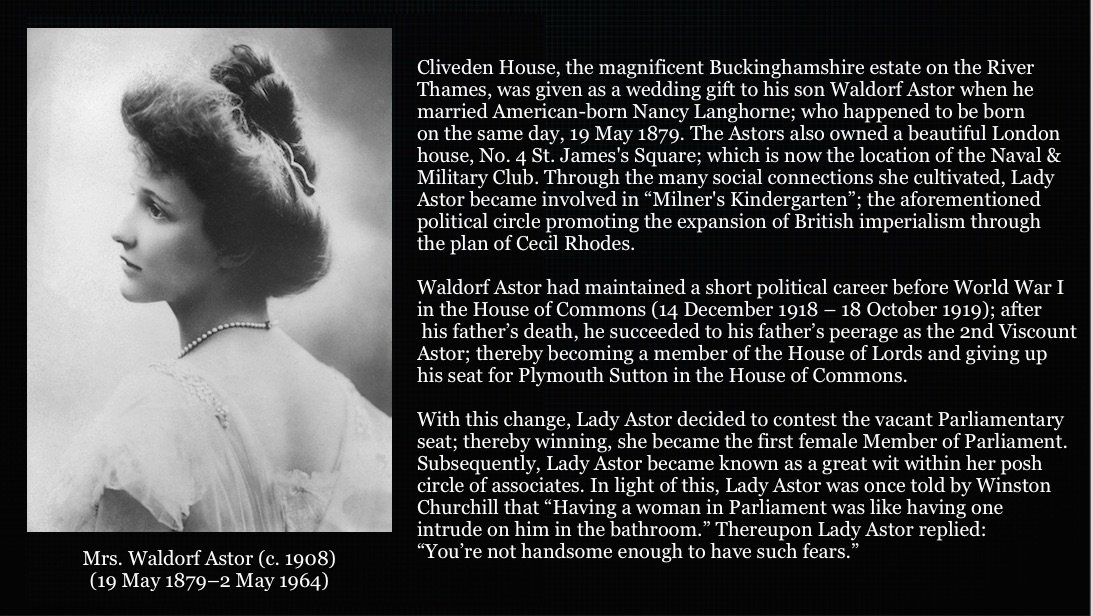