A Marian Apparition that Continues to Captivate Egypt and Believers Worldwide

Posted on February 29, 2016 by Cosmic Convergence

Our Lady of Zeitun 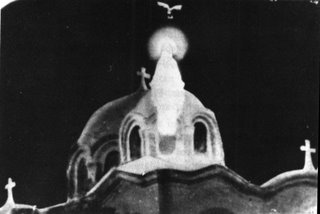 It was an ordinary evening in a small town called Zeitun in Egypt, some of the towns people were outside their doors chatting as they waited for their husbands to come home. The day had started as any other day, women cooked the breakfasts for their husbands and children, completed the housework and other chores. Men went to work just like any other ordinary day, some feeling tired while others enjoyed their job. Children did their chores and played games, nothing was different, or was it?

In the year 1968 something very different took place in this nondescript little province of Egypt, for it was the evening of April 2nd that two men noticed a woman who seemed to be floating upon the roof of a Church, the men at first thought they were witnessing a woman in distress and so cried out to save her. Some of the women in neighbouring houses came out to see what the fuss was about and they too saw the woman floating above the Church which was named St Mary’s which was of the Orthodox denomination.

Upon hearing of the woman the resident Priest came out to see for himself who was upon the roof of his Church! Even though the Priest mixed among the crowds he himself saw nothing, but one person after another with loud exclamations all saw this floating woman, till finally one of the women cried out, “It is our Holy Mother”!

The crowds stood stunned at such a sight, some were overcome with joy while others fretted that perhaps this was the beginning of the end! None though denied what they were seeing, for indeed it was a woman who seemed to glow as she looked at them from above the Church as she swayed and glided around the roof of the Church. Many people were amazed to see such a thing and right before their very eyes with many thousands of witnesses, some were deeply touched that Our Lady would deign to visit them, simple ordinary folk.

Our Lady rarely shows herself to the elite in society but prefers to reveal herself to little ones who are in need of her special Graces given to her from God. With her appearance at Zeitun our Lady allowed all to see her even political leaders of the country and also the wealthy some of whom were self proclaimed atheists!

Thousands of people poured into this little town to see for themselves this awe inspiring spectacle of the appearance of Mary, but just like Knock our Lady was silent. Many speculated as to the reasons why? Some suggested that this was the very place that the Holy Family had made their home when they had to flee Israel. Others suggested that perhaps Our Lady was warning of future calamities, the answer is no-one knows.

What we do know is that in 1968 Our Lady at times surrounded by lights of angelic beings allowed herself to be seen by thousands of people of all persuasions whether they be atheist, Orthodox, Catholic or Muslim all know and testified to what they had seen with their own eyes and through some of their camera lens as many took photo’s of our Lady.

Why did our Lady not speak? Perhaps her silence speaks louder than any words for in the Bible Our Lady spoke very little yet pondered much….maybe it is her example we should follow, to speak little and ponder much on the Mysteries of God as did this most Blessed Mother.

In this age of terror perhaps we need to absorb Our Lady’s silent appearance and to contemplate the Will of God in our lives.

I would encourage all to read more about Our Lady of Zeitun.

Peace of Christ to ALL
Copyright © 2006 Marie Smith. All rights reserved.