In JOHN (18-37) Pilate asked him, “Are you a king, Jesus answered: “You say that I am a King. I was born and came into the world for this ONE PURPOSE, to speak about the TRUTH. Whoever belongs to the TRUTH listens to me.”   “And what is TRUTH?” Pilate asked.

Today, how many of us would ask this very same question—WHAT IS TRUTH? 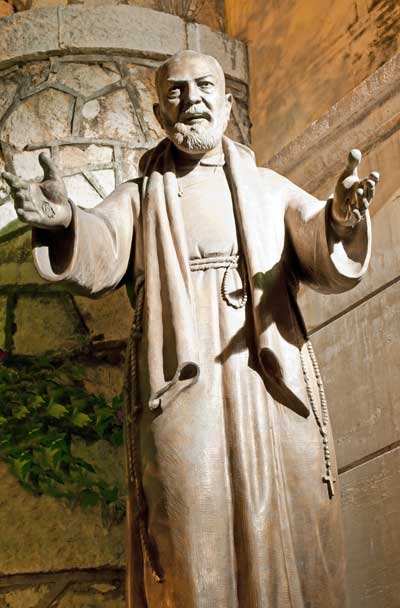 The good GOD blessed PADRE PIO with the gift of the SPIRIT. He marked his body with the (5) wounds of CHRIST CRUCIFIED, as a powerful witness to CHRIST’s Passion and Death.   And from the blood of those wounds came a perfumed fragrance, a special sign of PADRE PIO’s HOLY presence.

On March 3, 1962, PADRE PIO wrote a letter, in Italian, and sent it to the (4) visionaries of San Sebastian de GARABANDAL, (Conchita, Mari Cruz, Mari Loli and Jacinta Gonzales), in which he states, “At nine o’clock this morning the HOLY VIRGIN told me to say to you: “O Blessed young girls of San Sebastian de GARABANDAL, I promise you that I will be with you until the end of the centuries, and you will be with me during the end of the world and later united with me in the glory of paradise”.

PADRE PIO goes on to say to the visionaries, “I give you only one counsel: Pray and make others pray, because the world is at the beginning of perdition where Cardinals, Bishops and Priest are on the road to perdition and are taking many Catholics with them. People do not BELIEVE in you or in your conversations with the LADY IN WHITE, but they will BELIEVE when it is too late”.

Conchita is given the translated letter from Italian to Spanish by her high school language teacher, and she shows the letter to LADY OF GARABANDAL.    The HOLY VIRGIN tells Conchita that PADRE PIO sent the letter.  Conchita never knew who PADRE PIO was, but a seminarian explained that PADRE PIO was a Capuchin Friar from San Giovanni Rotondo, in Italy.

Conchita, “eventually” meets with PADRE PIO and finally realizes what a HOLY PERSON PADRE PIO was. Padre Pio’s involvement in the GARABANDAL events, culminated in his being granted a privilege that only one other person had been granted, at this time,—to see THE GREAT MIRACLE before he died.

The other person was Luis Andreu, a priest who while observing the (4) visionaries in ecstasy at the pines in GARABANDAL cried our “MIRACLE” (4) times. On the drive home with friends that night, he said: “I feel myself truly full of joy and happiness. “What a gift the VIRGIN has given me. How fortunate to have a Mother like her in heaven! I can’t have the least doubt about the truth of their visions,.” (the (4) visionaries) After saying this, he made a slight coughing sound, lowered his head too his chest and died.—(testimony of Rafael Fontaneda).

According to the LADY OF GARABANDAL, not only will Joey Lomangino (the blind messenger of GARABANDAL) receive his eyesight when the GREAT MIRACLE happens, but Father Luis Andreu will be taken out of his tomb and his body will be found incorrupt.

Another prophecy to come from OUR LADY OF GARABANDAL regarding the GREAT MIRACLE was that the HOLY FATHER would see it from wherever he was, and that PADRE PIO would see it too. So when the famous STIGMAST died on September 23, 1968, Conchita was perplexed as to why the prophecy had not come true.

A month later, Conchita was given a letter by Padre Bernardino Cennamo, the Superior of the Capuchin Order, in which he said that PADRE PIO told him that he had seen THE GREAT MIRACLE. He also sent her the white veil that covered his face while he lay in state in the morning of his death.

Conchita recounts: “I had the veil in front of me, as I was writing later that evening. When suddenly the whole room became filled with fragrance, the perfume so strong I started to cry.” It is not without significance that PADRE PIO should be IRREVOCABLY LINKED to the apparitions in GARABANDAL.

Believe in the impossible and you will do the incredible. Below are four (4) apparitions (visions) of some incredible prophecies that the IMMACULATE HEART OF MARY (she becomes the central figure in all these apparitions), reveals what people must do to attain eternal life.

We must make many sacrifices, perform much penance, visit the Blessed Sacrament frequently, lead good lives and always seek the TRUTH. In addition, spend time reading the messages the LADY conveyed   in GUADALUPE, LOURDES, FATIMA, AND GARABANDAL

In THE LADY OF GUADALUPE, our Blessed Mother imprinted her “image” on the Tilma of Jaun Diego and because of her “image” that still exists on the Tilma, many Mexicans were converted to Catholicism.   Even today, people go to GUADALUPE just to witness this phenomena.

In THE LADY OF LOURDES, ST BERNADETTE said she saw a beautiful LADY in the grotto, who appeared to her 18 times. ST. BERNADETTE was instrumental in finding the spring that gave miraculous cures to people who believe in the message of THE LADY OF LOURDES, even to this day. The civil authorities in Lourdes, opposed her in every way they could.  All asked for the name of this person that she saw in the grotto and on her last apparition the LADY said, “I am THE IMMACULATE CONCEPTION”.    ST. BERNADETTE was found incorrupt 30 years later.

In THE LADY OF FATIMA, Lucia, Francisco, and Jacinta were given three (3) secrets involving, HELL, the 2nd World War, and the third secret that was never made known.   They along with 70,000 others, witnessed the MIRACLE OF THE SUN, when the SUN danced in the sky, which today is the greatest MIRACLE ever seen by anyone.   The LADY told the (3) seers, in advance, that she would perform this MIRACLE so that all would BELIEVE in the events of FATIMA , which occurred, on the 13th of October, 1917.

In THE LADY OF GARABANDAL, Conchita, Mari Cruz, Mari Loli, and Jacinta Gonzales were involved in many ecstasies with OUR LADY and were given events which so startled these (4) visionaries, with dreadfully loud screams affecting the people of GARABANDAL to such an extent , that everyone in the village went to confession that very day. They were also given the three (3) time bombs of GARABANDAL—THE WARNING, THE GREAT MIRACLE AND THE CHASTISEMENT, that are explained in reading about the MESSAGES of GARABANDAL.