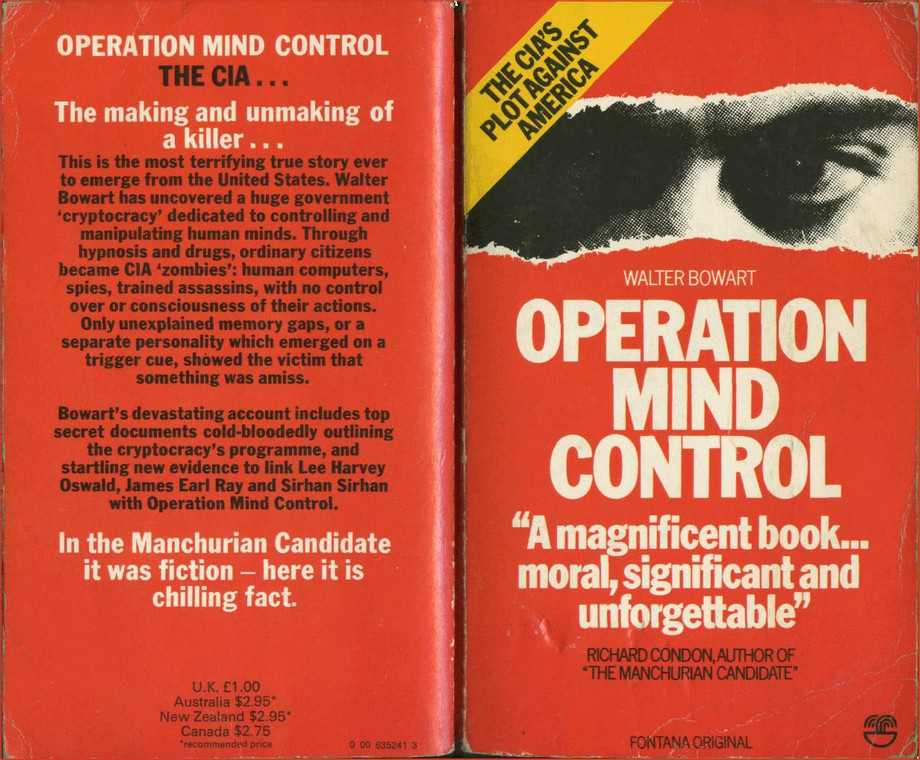 The CIA – The Making and Unmaking of a Killer

This is the most terrifying story ever to emerge from the United States. Walter Bowart has uncovered a huge government “cryptocracy” dedicated to controlling and manipulating human minds. Through hypnosis and drugs, ordinary citizens become CIA zombies: human computers, spies, trained assassins with no control over or consciousness of their actions. Only unexplained memory gaps, or a separate personality which emerged on a trigger cue, showed the victim that something was amiss.

One of the best documentaries exposing top secret government experiments in mind control is National Geographic’s CIA Secret Experiments. To view a five-minute trailer of this disturbing, yet incredibly important video visit the first link below. For the entire 45-minute film see the second link. For an even more revealing documentary on the same topic by the History Channel, click here.

Here’s how the film is described on the National Geographic website at the first link above:

“It’s the height of the Cold War and the United States government is desperate to combat the spread of Communism. The CIA launches a highly classified, top secret research program into the covert use of biological and chemical agents. In simulated attacks on enemy populations, entire cities in America are contaminated with bacteria, exposing millions of Americans to germ warfare. But the real focus of the research is on mastering the art of mind control.

“Psychiatrists at top academic institutions work under secret contract with the agency. Psychiatric patients, prisoners, even unwitting members of the public are exposed to a startling array of experiments designed to facilitate interrogations, induce amnesia and program in new behavior. Every psychological technique is explored, including hypnosis, electroshock therapy and lethal cocktails of drugs. What was the extent of these brainwashing experiments? How did the CIA become involved in such far-reaching and disturbing research? Join us as National Geographic presents: CIA Secret Experiments.”

This powerful National Geographic video documents how for decades, top secret government projects worked virtually non-stop to perfect means of controlling the human mind. Though for many years the government denied that these projects even existed, the details have long been preserved in thousands of pages of now declassified government documents reluctantly released through the Freedom of Information Act. LSD and electroshock therapy in huge doses given to unsuspecting citizens are only a part of this unbelievable program.

CIA Secret Experiments blows the lid off years of chilling experiments, drawing on the above-mentioned declassified documents and interviews with some of the victims. Hear from John Marks, the author of In Search of the Manchurian Candidate, who originally broke the story of the CIA’s abuses by unraveling the mysteries contained in the declassified documents. Learn how many of the most important records pertaining to the mind control experiments were destroyed by the director of the CIA in an attempt to prevent the details from ever being known.

The projects involved brutal, at times lethal experiments on thousands of unsuspecting citizens in direct defiance of law, all ethical codes, and basic human rights. Interviews with top psychiatrists, lawyers, and victims send chills up the spine. U.S. intelligence agencies spent millions on these mind control projects with a goal of creating programmable human spies. A former head of the American Psychiatric Association, Dr. Ewen Cameron, is one of many highly respected doctors who erased the personalities of thousands of unsuspecting victims, while many in the profession simply turned a blind eye.

You can help to stop these abuses by sharing this information with your friends and colleagues and bringing this crucial information to the attention of the media and our political representatives. By working together, we can and will build a brighter future for ourselves and for future generations.

What you can do:

(Amazon) July 4, 2005 Format: Paperback
This is for those wanting a more than 2-line review of Walter Bowart’s “Operation Mind Control.”

For whatever reason this book was not widely publicized nor advertised when it first came out during my high school years. I read a lot then and this book certainly would have been the type I’d wanted to read. OMC was published in 1978. In “the author’s note” Bowart describes his book as “an excercise in citizens’ intelligence” because he like many authr’s Bowart cites in his bibliography [including but not in entire: John Marks [“The Search for the Manchurian Candidate”], Lincoln Lawrence[“Were We Controlled?”], Donald Bain [“The Control of Candy Jones”] expressed “shock and outrage” over govenment abuse of our [US] people.

This was written by Richard Condon who wrote the 1959 novel, “The Manchurian Candidate.”

Discusses the concept of government mind control such as the use of drugs [including LSD], behavior modification, various frequency of sound, hypnosis and other “psycho-weapons.” [Note: this book was published 2 years after both Watergate was exposed and also, the Senate’s Church commitee had dredged up many ways the CIA had run afoul of the law & one part dealt with a subcommitee dealing with the MKULTRA scandal].

The author discusses how he came about to write this book & later put an ad in the mag “Soldier of Fortune” about possible military victims of gov’t mind control. After sifting thru the alledgedly obvious cranks he further interwiewed those who had convincing stories. Bowart discusses the concept of possible Manchurian candidates.

Discusses the case history of former Air Force “box pusher” [who scored very high in several aptitude tests]named David. David awakes in a hospital where doctors tell him he’d attempted suicide. He discusses later being involved in clandestine operations where for years he had no recall. At first all he recalled about his Vietnam experience is having fun at the beach with 2 other people & no military recall. Over time he recalls scenes that very much seem like the island scenes of the compound in the 2004 version of the movie “Manchurian Candidate.” He believes the alledged “suicide attempt” [which he denies attempting] was put on record to discredit him should he later recall events.

Discusses the case hitory of Vietnam POW George E. Smith who was in the Green Berets. Also discussed is the concept of Korean/Red China/Communist “brainwashing” where the victim is broken down psychologically & once the mind is “empty” it is refilled with whatever the brainwasher wants. This is illustrated by the story of Francis Gary Powers [and others] who was allegedly “brainwashed” in Korea [others in Vietnam, Russia] Discussian of brainwashing techniques that the Communists use versus the Western Model [slow vs faster with adjunct of drugs, electoshock for example]

CH. 4 “Without Knowledge Or Consent”

Hypnotist George Estabrooks techniques of mind control thru OSS [later CIA] on unwitting soldiers & later US & other countries citizens. The various uses of hypnosis combined with uses of drugs or shock in some cases is discussed as how it is used in the concept of mind control tests on unwitting “volunteers.” The “war” against Communism thru mind control now becomes “a private war within.”

Various uses of drugs [barbituates, nonbarbituate sedatives, calmatives, amphetamines & finally “conscious expanding” LSD] use for mind control discussed. Abbie Hoffman & Timothy Leary’s stories are discussed as are Sandoz lab’s [where LSD was “discoverd” association with CIA. The heroin addiction of many Vietnam GI’s and later the “voluntary” participation in the drug BZ[10 X stronger than LSD 25] by soldiers at Edgewood Arsenal. are discussed.

The government becomes more interested in not only the mind control of individuals but populations. Also, other biological weapons are discussed.

Discusses how in 1975 the public [tho in reality most news sources heavily censored this info or never reported it at all] learns of what was the MKULTRA files being destroyed & how well over 100 subprojects dealt with gov’t research on citizens of the US [also at least one was in Canada {not mentioned here}: the story of Dr Ewen Camereon]

Richard Helms DCI of the CIA and the various MK projects including MKULTRA, MKSEARCH, BLUEBIRD, ARTICHOKE, MKDELTA, etc are revealed but highly censored is discussed. A brief story about the California Medical Facility in Vacaville is discussed. Basically the CIA wanted to find out if & how it could control our minds.

CH 9. Discussion of of the CIA also mind controls their own. Discusses briefly Wild Bill Donovan of the OSS & the Dulles brothers and the concepts of the US cryptocracy & the military industrial complex & how these relate to mind control & the control the US gov’t thru various types of propaganda and mis-& dis-information. The cryptocracy engages scientists to do covert research engage in covert control & create the ideal of national security to enslave the US citizens with “Operational Mind Control,the ultimate technology of secrecy and control.”

The cryptocracy searches for the best killers: they look for the passive-aggressive types & desensitize them to gore & mayhem. Watson assists the cryptocracy with creating the model in a series of lectures. One of these experiments–Project Camelot–[the demise of Chile’s President Salvadore Allende] is an example of creating such assassins who will kill on demand. [Allende was overthrown in a CIA sponsored coup who killed himself after his palace was set afire by recruited assassins.]

A trained “multiple zombie-state killer named Luis Castillo is discussed in one theory of the JFK assassination. The connection to the JFK is debatable but what was fascinating was the discussion of how the various zombie states were fleshed out with various word commands.

Discusses how accused killers Lee Harvey Oswald, Sirhan Sirhan, & James Earl Ray acted under various depths of hypnosis and/or truth serums is interesting/chilling. The CIA has fingerprints throughout this chapter as well.

First discusses how the word assassin came to be.Then how the NSA uses this model to create assassins with its black ops & how the CIA is the “whipping post” of the NSA. Chilling interview of how they use ultrasonic & electronic manipulation of the brain so the assassin remembers nothing unless cued by the handler. Discusses how Presidents will obey their handlers wishes or face the same as JFK.

Summarizes the cryptocracies want/”need” to control the minds of society.

Some of the book is outdated but this book is often used as background in more recent works on the subject of mind control. The book is diificult to find & expect to pay even more than $100 for a copy in any condition. It took years to find one for a little more than half that price. The book is worth reading if you can find a copy of it. Hope this helps.