Posted on November 16, 2015 by Cosmic Convergence Jacques de Molay, last Grand Master of the Knights Templar, was ordered burned at the stake by King Philip IV of France on Friday the 13th in 1314. (Profimedia.com, Corbis)

CCRG Editor’s Note:
There is no question that the Friday the 13th meme is deeply embedded into the French psyche and specifically within Parisian society.  There are very good reasons why French culture especially has developed such an apprehension and fear of this particular “day and date” combination.

Down through the centuries even the emigrants from France have carried with them these same fears and concerns even to the shores of America.  Such is the emotional charge that has been profoundly attached to Friday the 13th that it is as if it has been purposefully inculcated.  And so it has … but by whom exactly?

There is a widely accepted historical narrative, which has been confirmed by various authoritative accounts verified by respected historians, that explains this deep-rooted societal fear of Friday the 13th.  One of those historical renditions is as follows:

The following, historical events, 700 years back in time, are related to peoples fear for the number 13 and Friday the 13th. It arrived to America and was spread all over the world by French emigrants, who heard of the tragedy in France and especially in Paris, below shortly described:

The tragedy concerns the banishment, arresting and outlawing of all Knights Templar, on Friday the 13th of October, the year 1307 against their declaration of innocence.

The last known Grand Master of the spiritual Order of the Knights Templar, Jacques de Molay, was burned to death on a slow fire on the stake outside the Notre Dame Church in Paris together with his successor, on Friday the 13th of March , the year 1314 after long time in prison and of unsuccessful trials to get an admittance of guilt, where even hard torture was involved.
(Source: The French Cultural Fear of Friday the 13th)

With this crucial understanding it is much easier to comprehend why those who planned and executed the false flag terror attacks on Paris did so on the universally feared Friday the 13th.

Of course, by now the world is filled with shock and grief over the latest killings and needless bloodshed, at the hands of terrorists.

Reports like those from The Guardian newspaper provide ‘live updates’

Paris attacks kill more than 120 people – as it happened

As you can seen from the title of this article, I want to talk about this event from a completely different angle.

Firstly by now you can hopefully realise that the world we live in is manipulated, and the news we receive is controlled (if not lies).

So when I read a few different articles today I came to understand this latest shooting in Paris, in the same year we had the previous Charlie Hebdo killings (which was very awful at the time).  But more on that later. California-based rock band, Eagles of Death Metal, was performing at the theater in Paris, France that was attacked by gunmen Friday night, and where 100 hostages are reportedly being held.

News reports suggest that at least a dozen people are dead near the Bataclan music venue, where the band was playing.

Update: The band reportedly escaped and is unharmed.

Second Update: Now News reports now indicate that over 100 people are dead at the Bataclan Venue, after terrorists began executing hostages inside. French authorities stormed the hall and ended the killing.

There were at least three other attacks in Paris, all apparently coordinated: a mass shooting at a restaurant near the Place de la République, where 18 were reported dead; explosions at the Stade de France, where French President François Hollande was watching a soccer match between France and Germany; and a shooting at Les Halles shopping mall. Update: News agencies now report six separate attacked.

This American heavy metal band playing in Paris on Friday the 13th is of great significance, and should not be down played because the dots are not connected by the standard media outlets.

By historic origins, the modern basis for the aura that surrounds Friday the 13th stems from Friday October the 13th, 1307. On this date, the Pope of the church in Rome in Conjunction with the King of France, carried out a secret death warrant against The Knights Templar.

The Templars were terminated as heretics, never again to hold the power that they had held for so long. The Grand Master, Jacques DeMolay, was arrested and before he was killed, was tortured and crucified.

Friday the Thirteenth is the day when people would rather stay in their holes, instead of having to face the evil this day would bring them. For they have created this curse for themselves.

Friday the 13th: Is a High Day in the Satanic Calendar

NOTE: Those who are bringing in Satan’s one-world Global Government know that muchbloodshed is needed to bring about the necessary “spiritual vibrations” (cooperation of devils) to bring in the New Order. This bloodshed is accomplished by way of ritual killings; planned terrorist events, planned disasters and wars; catastrophes caused by weather modification (ie. Hurricane Katrina, Hurricane Sandy); abortion; suicide; euthanasia; killings in foster care, and every conceivable way of causing death — especially on a large scale.

Notice that the Bilderberg Group has core of 39 members who are broken into 3 groups of 13  members in each group.

Notice that the core of 39 answers to the 13 who make up the Policy Committee.

Take special notice that the 13 members of the Policy Committee answer to the Round Table of Nine. You know that the original number of states in the United States of America was 13. The Constitution has 7 articles and was signed by 39 members of the Constitutional Convention.” Secret Societies / New World Order: by Milton William Cooper

“Hence every occurrence of the number thirteen, and likewise of every multiple of it, stamps that with which it stands in connection with rebellion, apostasy, defection, corruption, disintegration, revolution, or some kindred idea.” (Bullinger, E.W. Number in Scripture, Kregel Publications, (c)1967, p. 205).

Was not the founding of America in REBELLION of England?

The number 13 and 33 is the freemasons number.

On the morning of 7 January 2015 at about 11:30 local time, two brothers, Saïd and Chérif Kouachi, forced their way into the offices of the French satirical weekly newspaper Charlie Hebdo in Paris.

Armed with assault rifles and other weapons, they killed 11 people and injured 11 others in the building. After leaving, they killed a French National Police officer outside the building. The gunmen identified themselves as belonging to the Islamist terrorist group Al-Qaeda’s branch in Yemen, who took responsibility for the attack.  Several related attacks followed in the Île-de-France region, where a further five were killed and 11 wounded.

The 7th of January in the Satanic/Catholic Calendar is St. Winebald Day, a day of blood, sacrifice, and dismemberment. Males exclusively.

In systems such as Astrology and basic Numerology, eleven is considered to be a Master Number. Eleven can also represent sin; transgression and peril. Ten being the perfect number, eleven represents the exceeding of both. It is interesting to note that eleven when broken down (1+1=2) comprises the Two of duality. (LUCIFER tried/wanted to be equal to God)

Number eleven is amaster vibration and as such should not be reduced to a single number. People with this number could be both idealistic and visionary, and they are attracted to the unknown. They can be both unusual, interesting and magnetic personalities. Eleven bring the gift of spiritual inheritance, (system of the Anti-Christ) is gifted as the “Light-Bearer”. (One of the names of Lucifer)

When eleven is multiplied by the perfect number 3, the number 33 is produced, a number of tremendous occult importance. In 1933, Adolf Hitler and President Franklin Roosevelt came to power. Both these men were committed to the establishment of the New World Order, and their actions impacted humanity greatly. It was also in 1933 that the First Humanist Manifesto was issued. Do you see how Satan manipulated world history to produce three New World Order events in 1933? Thus, a powerful 333 served as a framework for world events in that year. Occultists Worship Numbers

11 – The subversion and undoing of 10; a flawed addition to that perfect order. 11 – As mentioned above under “Archived News,” the Antichrist/Prince is known as the 11th Horn. That is to say, he arises after the original 10 western European countries of the ancient Roman Empire [today known as the European Union]. Greece was accepted as the tenth country to join the E.U. in 1981. The Scripture in Daniel chapters 7 thru 12 explicitly mention that there will be one “Little Horn” [or Prince as he is called in 9:26] who arises AFTER these 10 horns [countries], who is also diverse from them, as he has “eyes like a man.” He is diverse, or different from them because they are countries, he is a man. Interestingly, Prince William was born right after the original 10 E.U. countries were inducted, Greece being the 10th, in 1981 making William, the future British King, born in 1982, the “11th Horn,” who the Scriptures prophesy is the future Antichrist.

Once more we are looking at a ‘False Flag’ to bring the world another step closer to the New World Order and the appearance of the Anti Christ. Already countries are talking of increased security. 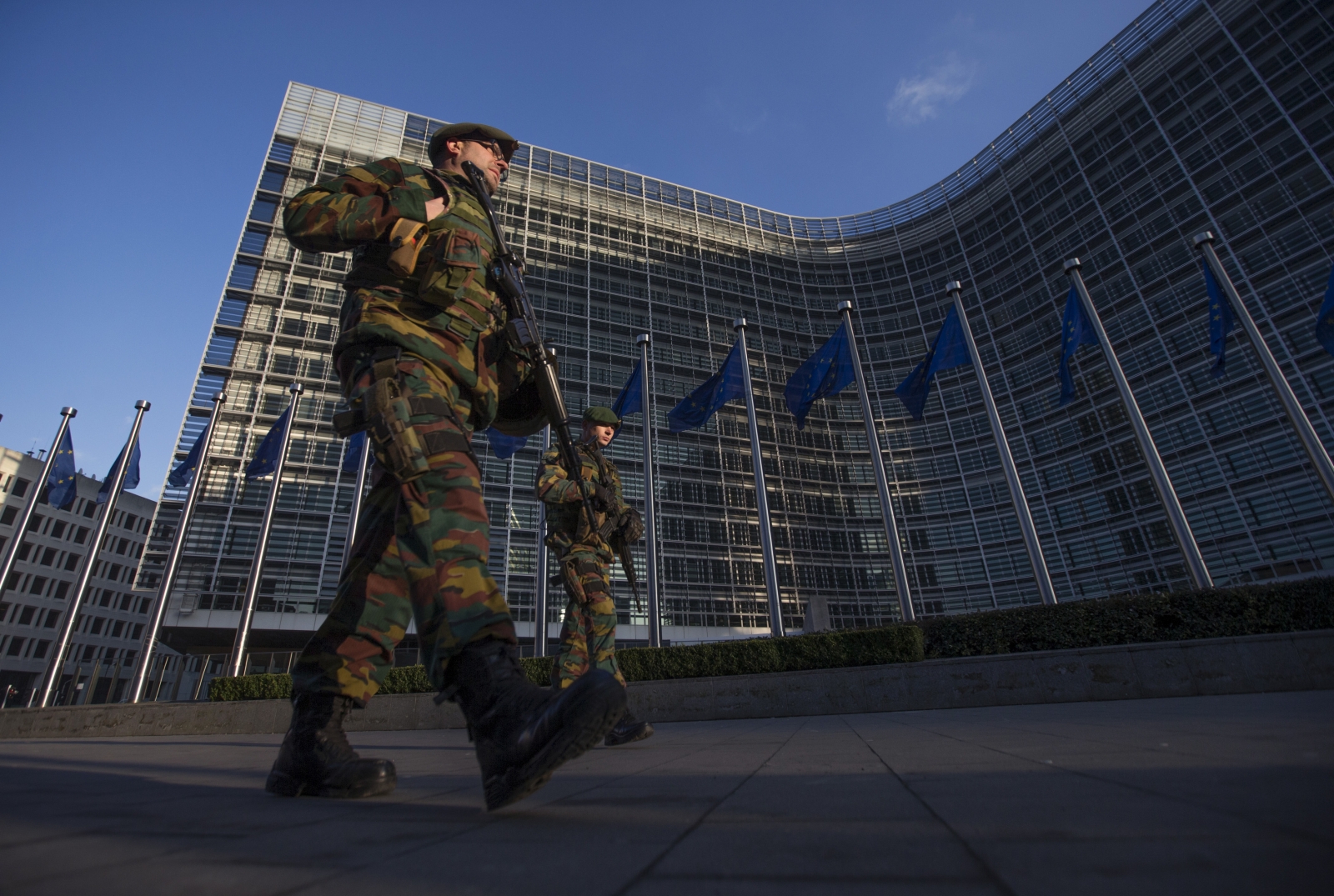 Remember Order must come through Chaos.

And that’s exactly what we are seeing!