Romney Bolted from Bain Capital Because of Actionable Fraud and Corruption

Posted on October 5, 2019 by Cosmic Convergence

Just released an hour ago, Rmuse at PoliticusUSA.com has published the long awaited article on what Mitt Romney is hiding from (and seek to be “retroactively” retired from) in August 2001. The story is entitled “Public Records Reveal Romney Profited From Corruption, Fraud and Racketeering at Bain” [Capital] (linked)

To sum it up, Bain Capital attorneys committed Perjury to become the eToys Debtor’s counsel, Creditors attorney and place their cohort in as President/ CEO. Then they “betrayed” their sworn duty to eToys, the shareholders and creditors for the sake of their secret client Bain Capital/ Kay Bee. When a bribe attempt was made and reported to the Delaware Department of Justice; a Bain Capital law firm attorney

(Colm Connolly – pictured right) was made the United States Attorney on August 2, 2001 and was a MNAT law firm partner in early 1999 (the SAME Exact time period that Mitt Romney is seeking to be “retroactively” resigned from). (Please see Dept of Justice Office of Legal Policy archived Resume of Mr. Connolly [here]).

The story is finally OUT by an up & coming Matt Taibbi type in the making (PoliticusUSA reporter Rmuse). Please read and spread the word to stop this Mitt Romney/ Bain Capital criminal disaster from trying to become an Al Capone in the White House?

Goldman Sachs took eToys public in 1999. At that time MNAT represented Goldman Sachs in Delaware (where eToys is formed as a company). Also in 1999, MNAT merged Mitt Romney and Bain Capital’s entity – “The Learning Company” – with Mattel Toys. The stock of eToys soared above $78, but the new public entity only received around $18. This classic pump-n-dump stock scheme gave Goldman Sachs and Bain Capital the perfect opportunity. All they needed was for the MNAT law firm (that also represented the Mormon Church’s claim on the Howard Hughes estate) – to LIE to the Chief Federal Justice in 2001 – and become eToys Debtor attorneys. Then, Mitt Romney’s other secret attorney (Paul Traub) lied to become the eToys Creditors attorney. Upon the success of those schemes, MNAT and Mr. Traub then put in Barry Gold as President/ CEO of eToys. Barry Gold worked for Mitt Romney and Michael Glazer at Stage Stores bankruptcy in 2000. Traub had been working with Romney/ Bain since the NeoStar case 2 decades ago. He was also at Jumbo Sports and Stage Stores with Barry Gold. 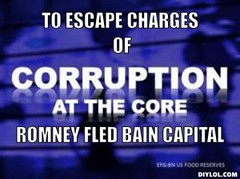 When a bribe was offered to this consultant and turned down, Mitt Romney panics and resigns as CEO of Bain Capital. Colm Connolly was a partner at MNAT from early 1999 to August 2, 2001 (the very same time Romney wants to be “retroactive” from). Former Pres GW Bush nominated Colm Connolly to be the United States Attorney in Wilmington Delaware. For his entire 7 years of tenure, Mr. Connolly buried all investigations and/ or prosecutions of Goldman Sachs and Bain Capital. This takes care of the fraud and corruption.

How it gets built up into Racketeering is also simple. MNAT, Paul Traub and Barry Gold have already confessed that the lied to a Chief federal judge 34 times over several years. But, due to the federal corruption with Colm Connolly, no prosecutions transpired. Yet, due to this pesky consultant and some eToys shareholders pushing buttons, they also had to perpetrate frauds on the California courts, the Delaware District Court, the United States 3rd Circuit Court of Appeals and the New York Supreme Court (where case 601805/2002 is placed entirely Under SEAL). Being that it is the same people, over several years, in many states, many courts and hundreds of millions (if not billions of dollars) = that equals RICO.

Colm Connolly was a MNAT law firm partner from March 1999 to August 2, 2001 (get the picture). Then, on August 2, 2001 GW Bush nominated Colm Connolly to be the United States Attorney in Delaware. Where, for his entire 7 year tenure in office, Colm refused to investigate and/ or prosecute Bain Capital, Mitt Romney, MNAT and Paul Traub.

Proof that MNAT had Books & Records in eToys DESTROYED (here) 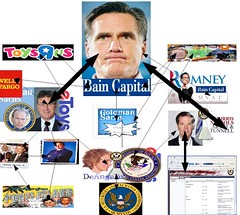 It’s a simple question – “Would we ever allow Al Capone to “retroactively” resign from his organized crimes“?

Can we dare permit Frank Nitti to endeavor to exonerate the head hauncho by his (Bain/ MNAT/ Colm Connolly) testimony that “the boss really wasn’t there when the crimes happened“?

Just because the names are changed – does not make the severity of the crimes any less severe. Al Capone went away for Tax Fraud. The best way to get at Mitt Romney’s tax issues – is by a thorough Bain Capital federal RICO investigation. Clawbacks are hell (as Madoff investors can tell you – including N.Y. Mets).

.
Last week, we filed a brief about this issue with the Wilmington Delaware Federal Bankruptcy Court in the eToys case. (see Brief naming Romney/ Bain Capital [here]) and Proof that the court clerk received the briefing [here] and the United States Trustees’ office received the litigation papers [here]).

.
Evidently our beloved Vice President Joe Biden had some insights into the true nature of MNAT attorney Colm Connolly. As the legal brief denotes in item 128 (on page 40/ last page) – then Senator Biden refused to sign the requisite Senate slip to permit a vote on Colm Connolly to become Delaware Federal District Court Judge. My remarks verbatim;

128. As anyone can see, a whistleblower suffers greatly for trying to do the right thing. But what’s right is right. Doing the correct thing as a service to the country, Vice President Joe Biden while still representing the State of Delaware as a United States Senator, did apparently have a gut instinct that Colm Connolly was a rotten apple. Though he had no authority over Department of Justice investigative matters, mercifully Senator Biden protected America by flatly refusing to sign the nomination slip for Colm Connolly to become a DE federal justice