The Remains of Seville’s Almohad Mosque

Posted on October 19, 2016 by Cosmic Convergence

Also known as
The Cathedral of Saint Mary of the See 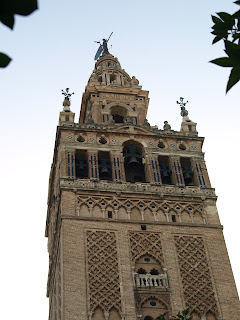 Imagine yourself in a mosque with a huge expansive space: a three acres big hall, a nave with 16 aisles and 13 bays, with its transept having domes ceiling, a large mehrab facing south, and a minbaron the left of it. Outside the hall is a courtyard, sehn, with many citron trees, cypresses, palms, lemon and orange trees and a central fountain uses for ablution. At the North wall there is a door,with its typical Andalusian arch. On the East side outside the wall is the tallest Minar in the whole Almohad territory, encompassing Al Andalus and Morocco.

The Minar is so big that instead of stairs it has ramps around it, 35 of them, gently inclined, so that the Muezzin could ride up on the horse five times a day to call the faithful to prayers. 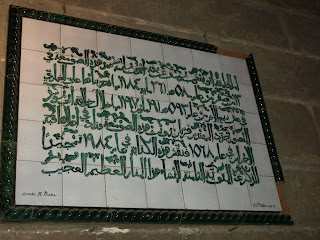 Abu Yaqub Yusuf must have felt thrilled in having this marvelous building among his earthly achievements. Every Friday prayers his name would be mentioned by the Imam. A captured image of Virgin Mary was somewhere in the mosque as a trophy of a war with the Catholics.

It served as the Aljamia Mosque of Seville for less than a century as Seville was conquered in 1248. It was then, like all other mosques was consecrated as a church. 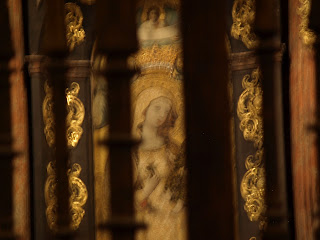 The Mehrab, aka Antigua Chapel:
The conquerors must have viewed the Mehrab as the most coveted place and put a fresco of Virgin Mary, holding Baby Christ in her left hand and a rose in her right hand. The Baby Christ is holding a bird in his hand. This was considered a real blessed spot for the sailors later who went to voyages around the world from Seville. It came to be known as the Antigua Chapel. Columbus got the inspiration form this icon to name the island in the Caribbean after it.

The Minar was such a point of pride for the Muslims that they wanted to raze it to ground before leaving the city rather than giving it away to the Christians. Alfonso X, son of Ferdinand III, threatened to kill all the Moorish population of the city if they did that. Minar was thus retained and made taller as with bells and now serves as the signature landmark for the city of Seville. It served as an inspiration for the Tower of Madison Square Garden II, in New York City, which was later demolished. http://en.wikipedia.org/wiki/File:Madison-square2.jpg

After using the mosque as a church for a century and a half, someone decided to raze it to the ground and built the largest cathedral of the country in its place. It took them a century to build it, the present day Cathedral of Virgin Mary. A few things they did not touch. The mehrab now known as the Antigua Chapel with the Virgin Mary ensconced in it, was left in its place. The Minar, now known as Giraldo was left and so was the courtyard with its outer walls and the door. 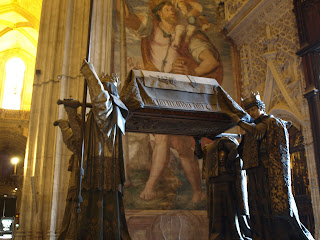 Later on, right next to the old mehrab, the elevated tomb of Columbus carried by four statues representing four areas of Spain, was installed where perhaps once the Mimbar stood and the Imam gave Friday sermons. 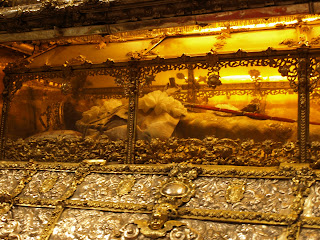 Next to the Minar is the Royal Chapel where you have the open view body of Saint Ferdinand, the king who conquered Cordoba and Seville. You also see the statue of him on the horse taking the city keys from the subdued Muslim King. 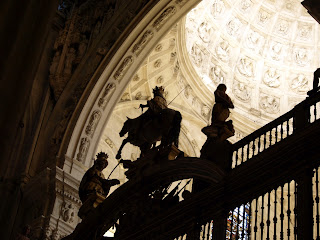 Some how I could appreciate this building and the former mosque better than the Cordoba Mosque, which I cover in a different post. Here I could visualize the mosque as a whole in my mind, as to where the dar-o-deewar and the minbar-o-mehrab could be. I could imagine hearing the call of Azaan, the faithful responding and entering through the door, and performing ablutions in the central courtyard; the Caliph walking from the Alcazar right outside the Minar and entering it from the eastern side.

And then I can fully appreciate the cathedral in its grander as it is build on a large space with the tallest nave in Spain. Its choir, treasury (carrying supposedly Jesus’s body parts) and all the different alters. I could see the mosque as a whole and the cathedral as a whole, something one cannot do while in Cordoba Mosque.

I assume it is the least known piece of Muslim architecture in Spain; it houses the largest cathedral in Spain and is the final resting place of two most important individuals in Spanish history, The King/Saint Ferdinand III who conquered Cordoba and Seville, and Cristobal Colon’ also known as Christopher Columbus.

Much of what I state here is my imagination and conjecture as there is quite incomplete information available, or at least I was unable to get it so far.

When Almovids took over Al Andalus after the Ummayads and Almovarids, Seville was their regional capital. Their seat of government was in Morocco, same as of Almovarids. Somewhere in early 12th century the rules must have thought of having their own signature mosque. I do not know when the mosque was commissioned and how did it look. Some say in 1172 it was started and  Ahmed bin Basso was the architect There is an inscription which says that the Minar, the Giraldo was completed at the time of the incarnation of  Abu Yaqub Yusuf.  There is one artistic rendition of the mosque in the works of Professor Piechotta.  (on Page 11).  The size of the mosque was about half of the Qurtuba Masjid . 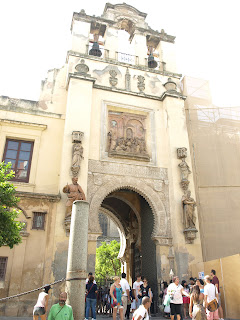 The door which is where you would have entered when it was a mosque; now that is the last point of the visit and one walks out of this, sometimes without noticing the original door. I noticed the door and the artwork on it later at night when Zoha and I were having a cup of coffee on the Calle Alemanes ie the street lining the North wall. 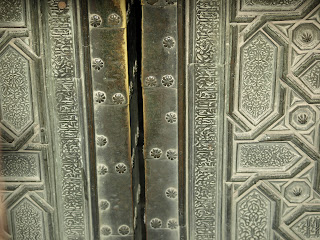