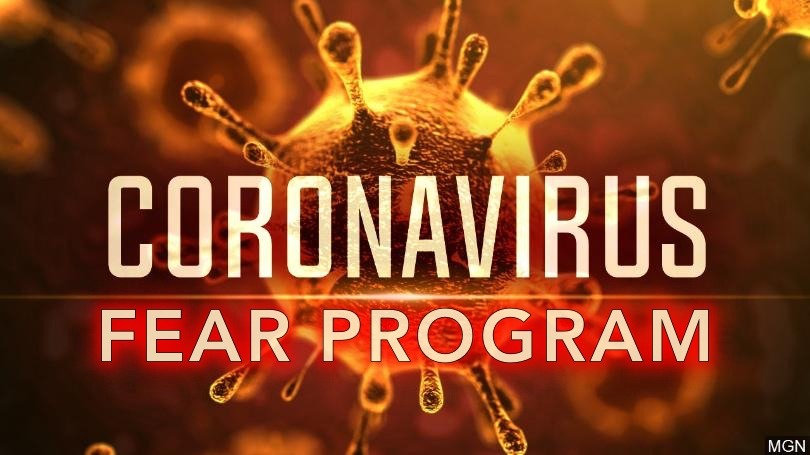 “People need to understand that the
fear virus is much more destructive
and deadly than the corona virus!”

Truly, it’s the highly contagious fear virus that has done most of the damage to America and beyond throughout 2020, not the relatively mild corona virus.

Let that sink in.

Really, think about that.

The entire planetary civilization has been paralyzed with fear — to varying degrees in various places — since the middle of January.

Now, contemplate the most important question that needs to be answered post-haste about this incomparable and unrelenting series of bioterrorist attacks throughout the world community of nations.

The correct answer to that question is guaranteed to produce the identities of the true perpetrators of every major terrorist attack and mass casualty event over the past 100
plus years, not only the current COVID-19 wave of bioterrorism. As follows:

Nothing changes until those who secretly rule US are prosecuted for
9/11, JFK, OK City, 5G, Chemtrails, Vaccines, COVID-19….

That particular fear-mongering tribe knows full well that the pernicious fear virus is much more debilitating than their bioengineered coronavirus; and they have launched numerous bioweapons since the Spanish Flu of 1918. Their crime spree against humanity actually began in earnest with the Federal Reserve Act of 1913 because they could then write themselves the checks to pay for any and all Gladio-style terrorism.

In point of fact, since the initial press reports out of Wuhan, China about the COVID-19 bioweapon were first published in January, the anecdotal information and official data have been parceled out in such a manner so as to [DRAMATICALLY] increase fear and anxiety among the global population. This is being done with highly purposeful design.

The extraordinary scope and magnitude and duration of this psychological operation means that its end goals are quite HUGE, and destined to get even bigger with each passing month. Who has not witnessed OPERATION COVID-19 morph into the much more all-encompassing COVID-1984 week after week?

This exceedingly complex global psyop has all the markings of a 9/11-level event but considerably greater in both national effect and personal impact. As a matter of fact, just like 9/11 was used to flesh out the skeleton of the U.S. National Security State, COVID-1984 is a ‘A Global 9/11’ to Inaugurate a Global Security Superstate.

In some ways, what happened in Wuhan City in 2019 and 2020 is similar to what happened in New York City and D.C. on September 11, 2001. The same fear-mongering perps executed a “shock and awe” event that would forever change the world. It was the same Zio-Anglo-American Military Special Ops and Intelligence Communities that carried out both events.

The state-sponsored, false flag terrorist attacks carried out on 9/11 were designed first and foremost to generate fear. LOTs of fear! And so they did!

As a result, the United States of America was first locked down and then the National Security State was shoehorned into place. The forever fear-mongering tribe responsible was so successful in this Republic-destroying endeavor because of their incessant invocation of ‘national security’.

KEY POINT: Those who perpetually invoke ‘national security’ are always the ones who need to be guarded against the most. The perpetrating tribe in the case of OPERATION COVID-19 are quite notorious for being the most treacherous and dangerous, malevolent and destructive of all the secret societies that currently rule the planet. See: The KHAZARIAN MAFIA: You Don’t Know, What You Don’t Know!

The American people have fallen prey to the fear virus in this way every time the perps infect the body politic some form of terrorism. They are particularly vulnerable to scaremongering because of the decades of Tavistock Institute social engineering that has coralled so many into the pen of political correctness and social conformity.

Today, via OPERATION COVID-19, it’s bioterrorism that is being used to control citizenries everywhere. Coronavirus Syndrome is perhaps the scariest of all the different type of terrorism ever employed by the tribe that runs the International Banking Cartel & Crime Syndicate.

In order to widely and continuously disseminate and propagate and proliferate the fear virus around the globe, an enormous amount of funding must be readily available. Only, and we stress ONLY, the International Banking Cartel & Crime Syndicate could have pulled off THE GREAT SCAMDEMIC for this reason alone.

However, the COVID-19 bioweapon is not nearly as fatal as they have led us to believe; after all, the perpetrators themselves will also be exposed to it. Therefore, it’s been clear from the get-go that the primary weapon has been the FEAR virus.

This is why the THE GREAT SCAMDEMIC was planned out so fastidiously; the New World Order cabal had to leverage what little reality they could create with a whole lot of fakery and fiction and fantasy. These bad actors are, after all, the very same tribe who have run Hollywood since the very beginning so running this CON was fairly easy for them, especially when they totally control the CIA’s Mockingbird Media.

The critical and final point here is that, before there was a bioengineered corona virus ready to be unleashed across the planet, their was a fear program created by directors, producers, screenwriters, crisis actors, etc. The mainstream media has been running with the novel coronavirus program every hour of every day since the moment they commenced with OPERATION COVID-19.

Now, again, just think about that.

Nothing — ABSOLUTELY NOTHING IN RECENT MEMORY OR IN THE DISTANT PAST — has ever happened like this before. Hence, you know there is something much, MUCH bigger going on here than anyone knows but an elite few.

Exactly what is that overwhelming force driving OPERATION COVID-19 as well as COVID-1984? 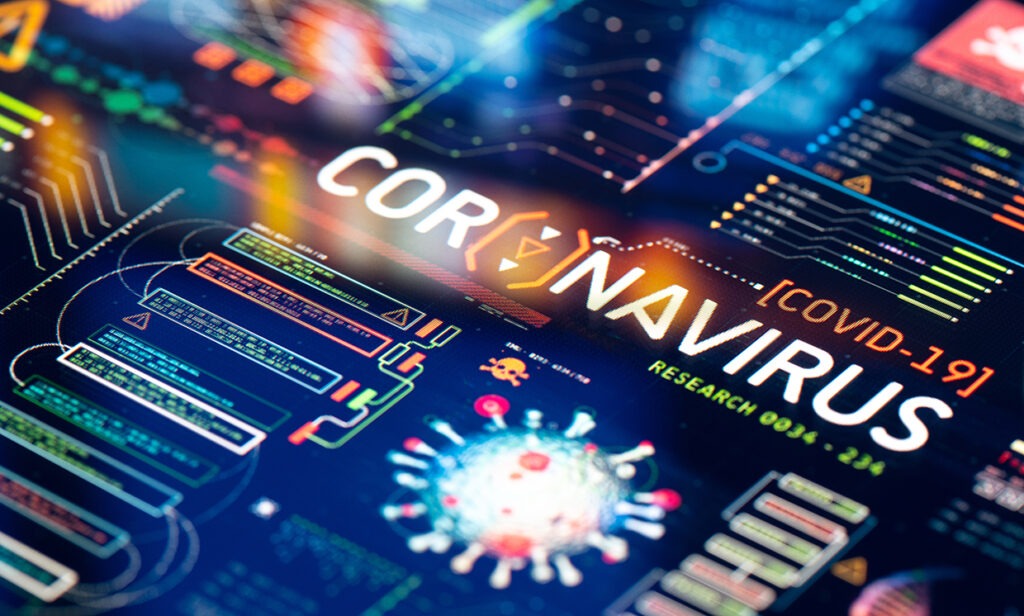 It’s imperative that citizenries throughout the world become aware of the true depth and breadth of the ongoing COVID-1984 psychological operation. But first, they must comprehend the complexity of the COVID-19 AI Simulation as follows.

Welcome to the COVID-19 AI Simulation! Brought to you by your AI ‘friends’ at DARPA.

The psyop known as COVID-1984 is an eminently much larger enterprise which is using OPERATION COVID-19 (essentially a global wave of bioterrorism) as a means to implement the hidden NWO agendas, as well as the overt UN agendas such as Agenda 21 and 2030 Agenda for Sustainable Development.

In order to accelerate these pivotal globalist schemes, an unprecedented fear virus program was created by a highly sophisticated and multifarious AI platform, perhaps even one that is overseen by a far superior AS entity*.

The entire world community of nations is now engaged in a HUGE race to see who can develop the most powerful AI platforms as well as perfect unsurpassable AS-controlled programs. The expeditious attainment of both of these goals is the greatest driving force on the planet today for both the Western and Eastern powers.

The upshot of this extreme competition is that whoever masters the realm of Autonomous Superintelligence will effectively rule the world. This is exactly why the United States and People’s Republic of China have been at loggerheads since the very that President Trump entered the Oval Office.

China is using Huawei’s 5G roll-outs throughout Europe and elsewhere to established the power grid necessary to hardwire the planet for it’s planned AI-coordinated society of the future. However, the United States has been working furiously on the very same priorities as the following exposé reveals in stunning detail.

TECHNO-TYRANNY: HOW THE US NATIONAL SECURITY STATE IS USING CORONAVIRUS TO FULFILL AN ORWELLIAN VISION

In fact, the trade wars and biowars and propaganda wars and proxy wars and diplomatic wars between the U.S. and China go way beyond commerce, currency and economics. For the winner of the AI war knows that it’s a winner take all scenario where it concerns the domination of the Earth realm. This is the real war taking place across the planet in 2020 and it’s only going to get much more ‘interesting’ before it resolves.

There are several conclusions that can be drawn from the ever-changing COVID-19 narrative as well as the rapidly emerging COVID-1984 game plan; however, one reigns supreme as follows.

COVID-1984: ‘A Global 9/11’ to Inaugurate a Global Security Superstate

Of course, OPERATION COVID-19 is merely a subset of COVID-1984 and, therefore, it is the latter that poses a much greater threat to humanity and to the biosphere. The current super-saturation of space with 5G Starlink satellites, for example, stands as a glaring testament to this swiftly manifesting reality.

Starlink is a satellite constellation being constructed by SpaceX to provide satellite Internet access. The constellation will consist of thousands of mass-produced small satellites in low Earth orbit, working in combination with ground transceivers.[1]

Once all the necessary infrastructure is in place, the Global Security Superstate will be in the position to flex its muscles in ways that Operation Gladio, the terrorist arm of NATO (aka North Atlantic Terrorist Organization), could only aspire to.

Hence, with weaponized satellites hovering overhead along with 5G networks deployed on the ground, as well as the Internet of Things transforming whole Smart Cities into 5G super-hotspots, the propagators of the fear virus will be firmly in control of planet Earth … … … unless we stop them!

Bottom Line: It’s not the COVID-19 corona virus, it’s the COVID-1984 fear virus that’s destroying the entire planetary civilization. The critical mandate, then, is for We the People to immediately neutralize the fear virus with raw truth and radioactive facts. We can also quarantine all the COVID-1984 main characters and cutouts like Big Brother BILL GATES: A Menace to Society Who Must Be Arrested and Prosecuted for Crimes Against Humanity.