Posted on February 20, 2020 by Cosmic Convergence

Special Note: As of this moment, the Internet space is awash with every theory and hypothesis, speculation and suspicion, debate and argument imaginable about the origin and purpose of the Wuhan coronavirus. However, at this point, all that really matters are the answers to two key questions: Who did it? And, why did they do it? There’s a third question that can also be asked that greatly facilitates the process of discovery—“Cui bono?” Hence, the real perpetrators of this global psyop can easily be identified by astutely observing all the diverse consequences and salient outcomes which will become more evident with each passing month. Many of those consequences and outcomes are listed below and will irrefutably incriminate the only tribe capable of such a “maggiore operazione”. See: Nothing changes until those who secretly rule US are prosecuted for 9/11, JFK, OK City, 5G, Chemtrails, Vaccines….

FACT: The Wuhan coronavirus, identified by WHO as COVID-19, is a highly complex pathogenic microorganism that causes an extremely contagious disease process.

FACT: This bioengineered coronavirus is transformed into a much more powerful bioweapon when released into an environment that has an activated 5G power grid, specific chemtrail formulations are being systematically sprayed, the populace has been vaccinated with flu vaccines and everpresent industrial pollution has compromised the respiratory systems.

FACT: This particular strain of coronavirus was created in a technologically advanced bioengineering laboratory and designed, not only to kill on a mass scale, but also to sustain a global pandemic.

FACT: This extremely virulent form of coronavirus was released in Wuhan, China during the same year that the city was designated a 5G demonstration zone which indicates the intention to commit genocide.

FACT: The coronavirus bioweapon could only have been launched, and successfully covered up, by an exceedingly powerful group of state actors, corporate entities and transnational institutions that subscribe to the New World Order globalist agenda.

FACT: The Wuhan coronavirus pandemic is an unusually premeditated depopulation event directed at China via a race-specific bioweapon similar to previous bioterrorist attacks against the Chinese such as the 2002 SARS outbreak.

FACT: This bioterrorist attack could very well evolve into a slow-motion Extinction Level Event and has already had overwhelming impacts on the global economy as it has caused China’s economy to grind to a halt.

There are actually several reasons why the New World Order globalist cabal has carried out the extraordinarily complex scheme known as the “Wuhan coronavirus pandemic”.

The following list represents the primary objectives of this emerging pandemic and, therefore, the intentions of those who run the world from the shadows. Each clandestine goal shown below contributes considerably to the advancement of the New World Order agenda.

While the implementation plan of the Wuhan coronavirus pandemic is being carried out every hour of every day throughout 2020, the true NWO motives will become crystal clear with each passing month. Globalism is on the march as a result of the nationalist governments and patriot movements springing up across the planet. Hence, the globalists put their plans to forge a Global Control Matrix into overdrive via the coronavirus scare as a means of compensating for so much time lost.

It’s of paramount importance for every resident of planet Earth to understand that the NWO perpetrators have a timeline set to establish a totalitarian One World Government, which will operate quite like the tyrannical European Union. Clearly, the coronavirus was released in China in the interest of achieving various aims that will facilitate the transition to global governance.

In point of fact, the mix of 16 globalist goals that follow could only be accomplished with a highly organized conspiratorial plot by which coordinated acts of bioterrorism would have profound and pervasive consequences for the entire planetary civilization. Such a Tavistock-inspired psyop could then produce a sufficient level of manufactured consent where citizenries everywhere demand the formation of a One World Government.

Now here’s the list of reasons why The Powers That Be bioengineered the Wuhan coronavirus pandemic, which is by no means exhaustive. Other NWO motives will surely surface in the months ahead.

(3) Ensure the Rapid and Widespread Military Deployment of 5G Globally

(14) Infect the Entire Global Population with the Coronavirus so That Future Outbreaks Can Be Triggered via Vaccines, 5G, Chemtrails, etc.

(15) Pose a Serious Threat to Trump’s Re-election with a Black Swan Event that Crashes the Stock Market and Collapses the U.S. Economy

There are other significant reasons, that are not listed above, which will be addressed in future posts as they more fully manifest. Vital background information and historical data about this bioengineered pandemic can be found in the first 3 exposés of this ongoing series as follows:

These three exposés break down the real Wuhan coronavirus back story. They also flesh out the skeleton of this extremely broad and deep conspiracy which then supports the 16 reasons listed above. Such a sophisticated series of acts of biowarfare could only have been undertaken by the major Western military powers of the Zio-Anglo-American Axis. Not only does no other state actor possess the advanced bioengineering technology and means of stealthy coronavirus dissemination, no other countries would be so foolish as to attack China in such a brazen and reckless manner. 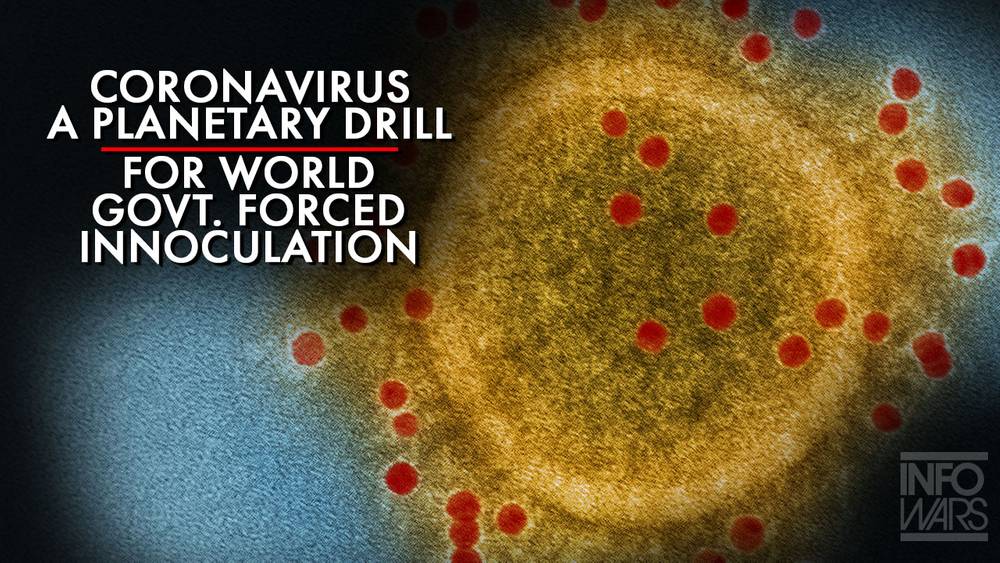 Why is this a “coronavirus neutron bomb”?

Because, the stealthy release of the coronavirus was the aggressive deployment of a bioweapon, as an act of biowarfare using a deadly infection agent, designed to wipe out the targeted populations in China while leaving the buildings intact.

That’s also what neutron bombs do!

And, that’s exactly what the perpetrators planned for. A neutron bomb kills all the people at ground zero while leaving all structures standing with no damage.

These same inveterate warmongers have displayed no reluctance to commit acts of genocide and other heinous war crimes like those perpetrated during the Syrian War by the ISIS terrorist groups which they created, armed, funded and materially supported.

Now here we are in China, and the very same cabal — the same tribe of genocidal maniacs– has no reservations about exterminating a whole race. And, they will do it here in the USA if they are not stopped post-haste. See: The Hidden Powers Behind the Destruction of America

It should also be pointed out that the same mass-murdering cabal was responsible for the French Revolution, Bolshevik Revolution, World Wars I & II, Korean War, Vietnam War, Iraq Wars, Afghanistan War, Libyan War and Ukraine Civil War, as well as the ongoing cold phase of their planned World War III. So what won’t they do in the pursuit of total world domination?!?!

What transpires over the course of 2020 will inevitably demonstrate how much of each of the foregoing objectives are successfully accomplished by the International Banking Cartel. For it’s only with the blessing of the world’s power elite such as the Black Nobility, Committee of 300 and other powerful Illuminati families that such ill-conceived biowarfare could have taken place.

The perpetrators may terminate the Wuhan coronavirus pandemic bioterror operation once they are found out by a critical mass of people. This highly misguided and malevolent scheme has not only angered a lot of folks the world over, it has drawn close scrutiny from millions of awake victims who want answers—NOW! Thank the Internet for that little wrinkle in this NWO depop scheme gone seriously awry, though they probably do not know that yet.

The perps could also decide to intensify this global psyop (out of sheer desperation) by conducting even more bioterror black operations against targeted nation states, transnational corporations or other institutional entities that have left, or tried to leave, the NWO reservation. In any event, THERE WILL BE BLOWBACK. And it will occur when the guilty least expect it. The Chinese are notorious for making sure that “instant karma” happens as close to the scene of the crime as possible. And the perps will not even see it coming.

KEY POINTS: It really does appear that the rapacious reptiles at the top of the food chain miscalculated with this naked depop event. Whereas scaremongering usually works pretty well for them, sometimes it can backfire—BIG TIME. Therefore, we are likely to see a boomerang effect that somehow exposes and takes out the most dangerous criminally insane psychopaths directly associated with the Wuhan bioterrorism such as Bill Gates, George Soros and other VIP vaccine pushers. Likewise, every high-profile 5G advocate and chemtrail denier is subject to a crash-and-burn moment for similar reasons. When the world experiences, and truly understands, the extreme harm and injury caused by the 5G roll-out and chemtrail spraying, everything can change in a day and a night. The nefarious globalist plan to mandate a vaccine as “the perfect remedy” to the coronavirus has already been seen through by countless anti-vaxxers the world over.

Regardless of the planned direction of this massive bioterrorist operation and complex psyop, the genie has been let out of the bottle. That stark reality introduces an inordinate degree of unpredictability and trepidation which humanity has rarely, if ever, experienced before. However, many folks are right now awakening to the true intentions of dark side, which sometimes only extreme fear can bring about. From that perspective, the Wuhan coronavirus pandemic may prove to be the most transformative sustained event of the Third Millennium for both people and planet alike.

In the meantime, the following coronavirus guidance is offered to those who wish to stay out of harm’s way: Here’s How Everyone Can Avoid Getting The Coronavirus.

There are many folks who completely deny the possibility that there is a WHO-identified coronavirus (COVID-19) in existence. They erroneously believe that everything we are now seeing are symptoms caused by the exposure to a combination of toxin-laden vaccines, chemtrail aerosol contaminants, 5G EMFs and microwaves, as well as purposefully time-released industrial pollution (that contains chemicals which amplify coronavirus symptoms) in Wuhan, China. While this media platform has presented a strong case for all of these factors, which have substantially exacerbated the symptom overwhelm experienced by Wuhan residents, there is also a bioweaponized virus at the root of this outbreak … just as there was with SARS, MERS, Swine Flu, Bird Flu, AIDS, the Spanish flu of 2018, etc. SOTN calls the specific bioweapon first released in Wuhan in 2019 the “Wuhan coronavirus”, which quite likely affects those with Chinese genetics much more adversely than those of other racial bloodlines. As with so many other influenza infection agents released on mainland China over decades, both the severity and duration of the resulting illness (and related symptoms) are always much greater at the point of origin in China.